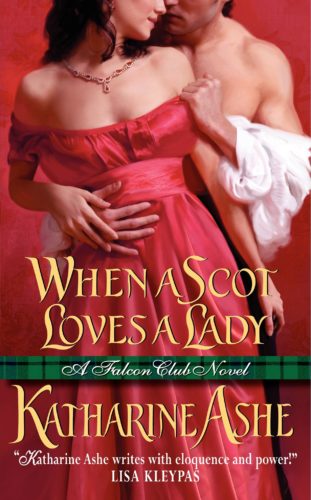 Book 1 in the Falcon Club Series

Welcome to the Falcon Club, five friends dedicated to one noble mission.

After years as a secret agent, Lord Leam Blackwood is ready to return home to Scotland. One temptation threatens his plans—Kitty Savege. The scandal-plagued lady warms his blood like a dram of fine whiskey. But a dangerous enemy stands in the way of desire, and to beat this foe Leam needs Kitty’s help.

Kitty never wanted to spend her holidays in a wretched country village. With snow up to the windows, escape is nowhere in sight. A roguish Scottish lord is. His brogue sends tingles of heat from Kitty’s frigid toes to her chilled nose, but she’s confident she can withstand that. What she cannot control is the reaction of her carefully guarded heart when she discovers this beast is, in fact, no beast at all… 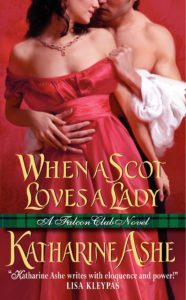 Kitty drew a long breath. Sat back in her chair. Adjusted her skirt.

“I haven’t any money left. You are a sharp, my lord. But that is to be expected.” She could not entirely meet his eye.

“Niver cheated a day in ma life. But tae be fair, lass, A’ll give ye the chance tae win it back.”

“I said I haven’t the funds for it. Weren’t you listening?”

“Ta’every word.” He had listened when she begged him to kiss her when he did not wish to. Twice. On the surface his eyes looked lazy. Within, that hint of steel flickered. It did not seem cold now, but molten as it had been beneath the stair. “Wi’ or wi’out money, ye’ve still got something A’d care tae win.”

He rumbled, “Those fine garments ye’ve got on.”

Kitty stared, mouth agape, a wild flutter of nerves tangling about her middle.

“My clothing?” She sounded like a perfect nincompoop. But she had not expected this. She had expected…

Apparently she was, as ever, quite a pathetically naïve fool.

“Ye lose a hand, A take a piece. Ye win a hand…” A grin curved the corner of his gorgeous mouth.

“Is this what I have brought upon myself then?” Her tone sounded diffident without any effort, her breaths shallow and some place in her chest wretchedly flat. “A game played by rogues in hells?”

“You are actually serious.” He was not a gentleman. She had imagined all the rest, his silent understanding and his honor. It was almost a relief to know it. It mattered nothing at all what he had said beneath the stair about Poole. He simply wanted her to remove her clothes before him and perhaps more. That was all.

It surprised Kitty how horrid that realization felt, in the very pit of her stomach, and how much she wanted to play his scandalous game, even so. Perhaps the society biddies knew her better than she knew herself. Perhaps she was a wanton. Perhaps she always had been.

“Yer cheeks are pink.” Deliciously pink. And her eyes glimmered with muted thrill beneath the mask of sophistication.

“They are not.” But she slipped her slender hands over her cheeks and her lips parted. Leam could taste those lips, sweet cherries and wood smoke, and glimpse the pink flash of temptation within. He wanted that tongue wrapped around his again and at present he did not care what he must do to ensure it. He cared for nothing. His creed for five years could serve him well tonight.

“Well, I suppose they are,” she conceded. “But it isn’t to be wondered at.”

She regarded him warily. And well she might. He should not have spoken so. That libertine arse Poole be damned, Kitty Savege was a lady, and she deserved to be treated as one, which he had not been doing since she set foot in this inn. Of course, she hadn’t helped matters any.

But it was far too late for regrets. He was already damned, and she with him. Folly’s fool knew no solitude.

“That is not what I meant,” she said, voice cool but eyes bright.

“I do not—” She halted. Her gaze fixed on his mouth, lingering until Leam’s cravat tightened. Then it slid slowly down his neck and chest, oddly searching. By God, she looked like a girl at times, vulnerable and uncertain beneath the façade of the ice princess she tried to appear, poised and tantalizingly aloof.

Her gaze returned to his, direct.

“What game are we playing, my lord?”

Leam did not wish to consider the consequences any longer. Not tonight. The frustration from her earlier kisses proved too much. He wanted one thing now.

Slowly her lips curved up, first at one edge, then the other. His chest ached.

“I accept your offer. It sounds like a splendid idea. I don’t know why I didn’t think of it first,” adding beneath her breath as she moved to the opposite seat, “except that I am not a roguish barbarian, of course.”

“I thought you didn’t like this gown.” Her fine eyes danced, releasing the pressure behind his ribs. She would play. He must remember what he knew of her and disregard what the poet in him would believe, would he but give the poet rein.

“‘Tis the reason for the game, lass,” he said smoothly.

“You will not win it. I know my way around a card table.” She paused. “But were you to win it…” Her cheeks flamed “You cannot burn it or some such nonsense. I must have it back, at least until my luggage arrives. I cannot very well go about in my petticoat, can I?”

Leam sucked in a breath. He passed her the deck and she dealt.

“How shall we do this, my lord, by declaration and tricks or by hand? I daresay the former, as it is quite late already.”

Leam smiled but he wished to laugh. At this moment, he lived a fantasy. She was intelligent, beautiful, brazen, and could indeed laugh with him, albeit quietly. He should cut out his tongue. He should run and bolt himself into his bedchamber—alone. He should never have done this, for more reasons than he could count.

They played, and she played extraordinarily well, considerably better than she had earlier.

“Four queens.” She did not look up from her cards. Leam had nothing to match them. He untied his neckcloth and removed it.

An unexpected trick went to the table beneath her fingertips. Leam’s signet ring followed it.

“I had no particular desire to win then.” Her gaze came up, shining, and shifted to his neck. Leam had never before felt less dressed wearing so many clothes.

She took another trick. “Now what, my lord?”

He removed his shoes. It seemed safest. This had not been wise. But he could not halt it now. He wanted to see her undressed more than he wanted to breathe.

Cards shifted from table to hands, hands to table. His stockings came off, then his kerchief came from his pocket, followed by his watch.

She studied the timepiece on the table.

“You are not playing fairly, my lord. What shall it be next, a snuff box?”

“A dinna tak snuff.” Perhaps she only wished to make a fool of him, but her eyes remained lit, her beautiful lips irrepressibly twitching. “Yer fixing to have me in ma drawers and ye still laced up tight, aren’t ye?’

“I am not fixing anything. I am simply playing cards and you are losing.”

He won the jewels in her ears. Watching her remove them was like watching art at its creation, the tilt of her fine jaw, the ivory curve of her throat, the deft movement of her graceful fingers. She laid the earbobs on the table.

“You have had your impressive sequence, my lord. But no more.” She spoke with only a hint of unevenness in her voice, but she did not now meet his gaze.

Her shoes and shawl went next. He could see no more of her than before, but as she discarded each item her cheeks grew pinker, her hands less steady.

“My trick,” he murmured, setting down a king to stop her run of hearts.

“Hm. I should ask you to look away, but that seems absurdly prim given the circumstances.”

A minute later she said, “All right.”

On the pile of shoes and shawl rested a pair of stockings. Of fine woven wool and modest hue, they seemed suitable for traveling. Leam had seen silk stockings thin as water; he had removed them from feminine legs they had barely covered. But these practical scraps of fabric did to him what no stockings on or off a woman had before.

Beneath Kitty Savege’s skirts, her legs were now bared.

He must have those skirts.

He set to his strategy afresh.

She won his coat. As he pulled it off and laid it aside, she took a quick, deep breath.

“I told you I would win.” Her sweet voice had lost all smoothness. “You mustn’t play against opponents you do not know, Lord Blackwood. Hasn’t anyone ever told you that before?”

He didn’t. And he did. He could see the same in her eyes, reluctance yet eagerness. The day had felt like an eternity, the evening endless waiting. But her slightly hesitant surrender now was undoing him like nothing ever had. The mix of innocence and confidence intoxicated. Entranced. Watching her was to witness the most elegant of carriages slowly, surely crash of its own will, as though crashing were to be desired.

“Nine,” she said. “You cannot have better. Your waistcoat, my lord?”

He removed it. She stared. Leam locked his grip around the chair arm, holding himself in his seat.

How she finally won the hand with her gaze glued to his shirt front he hadn’t any idea, unless it was that he wasn’t looking at his cards at all any longer. Her thundercloud eyes widened yet further as he unbuttoned the linen and tugged it off.

Her face snapped away. Her knuckles and fingertips showed white about the cards. His heart beat so hard he suspected she might see the flinching of flesh. But since she now seemed to be studying the waning fire across the chamber with great interest, he did nothing to hide. The cool air slipped over his skin. He leaned back in the chair and took up the cards to shuffle.

“I daresay this is not a very wise idea.” Her words were breathless. “What, with Lady Emily and the gentlemen just upstairs.”

It was not wise for many more reasons than that. It hadn’t been since they’d started this.

“They’re all abed, lass. But if ye’ve had eneuch o cards…”

“My lord,” she whispered, “I believe it is your deal.” 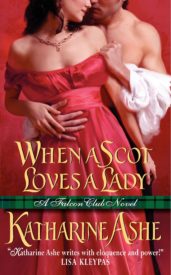 is Book 1 in the Falcon Club Series

A Scots hero whose speech is almost undecipherable, a spine-of-steel heroine who is brave as she is bright, a trapped-together premise, a secret circle of spies, sensationally intelligent writing, and a true, weak-in-the-knees love story.

A lushly intense romance… Throw in a mystery, a twisty, complex denouement, and radiant prose, and readers will be saddened to read the final page.

A roller coaster ride with fantastic, romantic highs and tearful, heartbreaking lows on the way to a very satisfying happily ever after. The writing is superb.

— The Season for Romance

Chock full of all of the elements that make me love historical romance. Sweeping, intriguing, fast paced, sexy... cannot be put down.