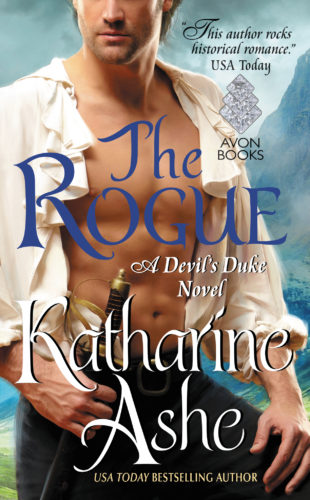 Lady Constance Read is independent, beautiful, and in need of a husband—now. The last man on earth she wants is the rogue who broke her heart six years ago, never mind that his kisses are scorching hot.

Evan Saint-André Sterling is rich, scarred, and finished with women—forever. He’s not about to lose his head over the bewitching beauty who once turned his life upside down.

But Constance needs a warrior, and Saint is the perfect man for the job. Only as a married woman can she penetrate Scotland’s most notorious secret society and bring a diabolical duke to justice. When Constance and Saint become allies—and passionate lovers—he’ll risk everything to protect the only woman he has ever loved.

I absolutely love sword fighting.  It's all strength and speed and danger and incredible, mind-blowing skill.

Before I wrote The Rogue, I had written noblemen heroes who expertly wielded swords.  But I longed to write a hero without wealth or a noble title who made his living teaching swordsmanship.  Even so, my sword-fighting rogue Saint Sterling was not the original inspiration for this novel.

My father came up with this novel in a dream.

Dad had vivid dreams, and he could remember every detail of them.  One evening we were relaxing in the family room before dinner (I crocheting a blanket, he doing the crossword, both of us sipping cocktails) when he began narrating to me an elaborate plot he'd dreamed the previous night.  In this dream a titled Englishman gained staggering wealth in trade, then returned home to purchase a magnificent estate upon which he raised a strong, independent daughter.  “Staggering wealth” and “magnificent estate” seemed to me a very good start to a romance novel.  A strong, independent daughter cinched it.

Thrilled that my father was inventing exciting plots for my books while he slept, I (tossed aside the crochet and) grabbed a notepad, and scribbled down the dream.

I lost the notepad.  (Though I suppose it could be buried in a sock drawer.)  But for more than a decade I carried the details of that dream in my imagination.  And those bits of story grew.  They became a rich world of lifelong friendship, horrible tragedy, shadowy intrigue, and above all passionate love.  The estate became Fellsbourne, the home of the Marquess of Doreé, who promised his son in marriage to the strong, independent daughter of his closest friend, the Scottish Duke of Read.

But that daughter Constance was not content playing by the rules of these powerful, controlling men.  She had other ideas.  Other desires.  Like learning how to wield a gleaming length of steel.

Both The Rogue and In the Arms of a Marquess arose from the world inspired by my father’s dream.  If Dad were still here, I think he would be proud of these two truly honorable heroes and the strong, independent women to whom they lose their hearts. 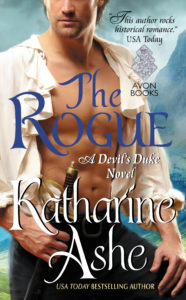 Of the dozen men in the room, he was the only man she should not be staring at. He was not a lord. Not an heir to a fortune. Not a scion of impressive lineage or a favorite of the prince. He wasn’t even really a gentleman.

Yet she could not look away.

It shouldn’t have mattered; a hidden niche was an excellent place from which a young lady could spy on a risqué party. Until someone else discovered it.

For four nights now no one had noticed her peeking from a door that could barely be called a door in the corner of the ballroom. These passages had been fashioned in an earlier era of rebellion, and everybody had long since forgotten them.

A quality of familiarity braided with danger commanded the breadth of his shoulders and the candlelight in his eyes as he watched her. Yet she did not duck back into the dark passage and escape. She had no fear that he would know her. Like the women who had actually been invited to the party, her mask hid the upper half of her face. Anyway, she knew no one in society. Her father had not yet taken her to London, only deposited her here at Fellsbourne, where he imagined her safe in the company of his dear friend’s family. Where she had always in fact been safe. Teased, taunted, treated like an annoying younger sister, and very carelessly acknowledged. But safe.

Not removing his eyes from her, the stranger unfolded himself from the chair with predatorial grace. He moved like a hunter, lean and powerful and aware. Not entirely human. Even at rest he had watched the others, disinterested in the amorous flirtations of the other men and the women here to entertain them, yet keen-eyed. Like an elven prince studying mortal beings, he observed.

For four nights she had wondered, if she were one of those women would he be interested in her? Would he seek her attention? Would he touch her as the other men touched those women—as she longed to be touched—held—told she was special—good—beautiful?

She was wicked to her marrow.

Wicked to want a stranger’s notice. Wicked to relish the thrill in her belly as he walked

Under normal circumstances her tongue was lithe enough. But normal circumstances had never in her wildest misbehaviors included a man with eyes like his—green, clear and shining, moonlight cast upon the waters of a forest spring. Perhaps he was not entirely human. This wasn’t Scotland. But England had its fair share of mystical beings too.

When he stood within no more than two wicked feet of her, her tongue failed.

“You were staring at me,” he said in a voice like fire-heated brandy—rich, deep.

“You were staring at me.” The low timbre of her own words startled her.

“One of us must have begun it.”

“Perhaps it was spontaneously mutual. Or it was coincidence, and both of us imagined the other began it.”

“How mortifying for us both then.” The slightest smile appeared at the corner of his mouth that was beautiful. Beautiful. She had never thought about men’s mouths before. She had never even noticed them. Now she noticed, and it did hot things to her insides.

“Or fortunate,” she ventured. She was grinning, showing her big teeth. But she couldn’t care. A young man was smiling at her, a young man with sun-darkened skin and whiskers cut square and scant about his mouth, like a pirate too busy marauding to shave for a day or two. Not very mystical, true. His hair was the color of ancient gilt, curving about his collar and swept dashingly back from his brow. A military saber hung along his thigh, long and encased in dark leather. Its hilt glittered.

He was staring at her lips, and so she stared at his. Giddy trills climbed up her middle.

His lips made her think of kisses. Want kisses. Kisses on her mouth. Kisses on her neck like those that the loose women got from the other men. Kisses wherever he would give them to her.

She darted a glance into the ballroom. All of the women wore costumes, scanty, sheer, slipping from shoulders beneath gentlemen’s bold fingertips. Jack was throwing a masquerade for his friends and these women. Women she should not envy.

She should not be here. She should be at the dower house a quarter mile distant, where Eliza had drunk whiskey with dinner and now snored comfortably by the parlor fireplace.

“I cannot dance tonight,” she said with more regret than she remembered ever saying anything.

“Cannot? Or will not with me?” His tongue shaped words decadently, as though the syllables were born to kiss his lips and taunt her with what she could not have.

He seemed to study her face: her too-big eyes, her too-small nose, the mouth that was too wide, brow that was too spotted, and cheeks that were too round. She knew her flaws, and yet he seemed to like studying them.

“What is your name?”

“I haven’t one.” Not that she could tell a stranger with elven eyes and pirate whiskers.

He smiled, and it was such a simple unveiling of pleasure that her heart thumped against a couple of her ribs.

“I will call you Beauty,” he said, then his brow creased. “But you have heard that before.”

“Then I suppose I must call you Beast,” she replied. She liked the tingling tension in her belly that he had deposited there with only his smile. 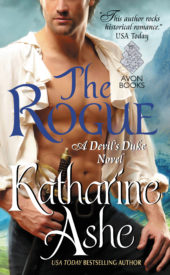 is Book 1 in the Devil’s Duke Series

is Book 4 in the Falcon Club Series

The chemistry between them is electric… Ashe’s writing is lyrical and almost poetic in places, the plotting is tight, the romance is sensual and beautifully developed; and Saint is easily one of the finest romantic heroes I’ve read in quite some time.

A strong and independent female protagonist... Lovers of historical romance and mysteries are sure to enjoy this novel.

The mystery plotline is intriguing, the looming danger gripping, but the romance between Saint and Constance is truly stellar.

Lush and eloquent prose... Saint is the hero I always wish for, but seldom encounter… Ashe demonstrates that historical romance can be daring and original, while remaining faithful to the Regency era.

Best Romances of the Month

The desperate yearning—and dangerous secrets—between the star-crossed lovers had my stomach in knots until the very end of this hypnotic book.

Powerful, suspenseful and sensual... a marvelous merger of two storylines that mesh perfectly.