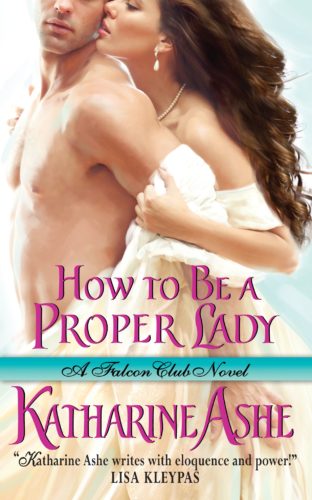 Book 2 in the Falcon Club Series

The Rules of Being a Proper Lady:

1) Never take steps greater than six inches apart
2) Never look boldly at a gentleman
3) And never, ever kiss a man who is not your fiancé…

But beautiful, bold Viola Carlyle doesn’t care about the rules. And she desperately wants to kiss the notoriously tempting Captain Jin Seton, the man who brought her kicking and fighting back to English society. Kidnapped as a child, now she longs to return to that life of freedom where she was able to live—and love—as she wished.

Having hunted Viola for two years, Jin Seton has finally found his good luck—for by finding Viola his oldest, deepest debt will at last be paid. And although he has vowed not to let her win his heart, this very improper lady might finally be the one who tames him.

Characters often tell me to write their stories.

I am completely serious.

Some are subtle, just showing up on the page of another hero or heroine’s book and waiting for me to notice them.  Others don’t take chances, peeking out from behind a door and throwing me a Meaningful Look.  All of them are respectful, waiting until I’m able to turn to their stories fully.

Then there are the characters that insist.

I had just begun writing Captured by a Rogue Lord, and was happily getting to know the hero of that novel -- Lord Alex Savege, aka the pirate captain Redstone -- when Jin appeared on deck and spoke to his captain.  Then Jin spoke to me.  Directly.  That is, he stepped out from beneath my fingertips, came to stand proudly and powerfully (not to mention really handsomely) at my shoulder, and said in no uncertain terms, “Write my story.”

Flabbergasted (I mean, I was only on chapter one of another hero’s book), I said, “Um… well… okay?  But I’ve got a few other books to write first.”

He replied, “Give me the woman of my dreams.”

Short on words, long on confidence, this sailor.

With a bit of affront, I replied, “Of course!”  Because every perfect hero deserves his perfect heroine.  And I was already beginning to suspect that Jin might indeed be a perfect hero.

This assurance, however, did not satisfy him.

“Who will she be?” he demanded.

Not particularly patient either, this ex-pirate I was swiftly coming to love.  For you see, as under Jin’s sea-hawk eyes my fingers continued to fly, on the page he was now insisting to his captain that the ship needed cleaning and the men needed rest and that Alex himself needed to wake up and care for the people of his estate, including his family.  And in these precious moments I was learning that Jin Seton -- a man with no family, no estate, no ship of his own -- was a man with a mission to do good, always good, despite the horrors of his past.

I craned my neck and gave him hard stare for hard stare.  “I don’t know yet.  For pity’s sake, this is all very new.  Give an author a day or two to get her bearings, will you?”

With a severe yet faintly regal bow of his head that warned he would hold me to that promise, he withdrew.  But it turned out I didn’t need a few days.  Within hours I knew.  It was so obvious, so utterly right.

When I told Viola, aka Captain Violet la Vile, the news, her brow furrowed and then she replied in no uncertain terms, “I am already in love with someone else.  I have been for years.  I intend to marry him.”

I gaped at Viola, and a friend's words from years earlier came to me, words tossed to me jokingly while were were taking a walk together.  That day as we traipsed through the Carolina woods, I had been telling her about a boy I’d known decades ago, how he had teased and flirted endlessly till I’d believed I adored him, and had broken my young heart.  Laughingly my friend had said, “You should write him as a villain in a novel.”

As I stood there looking into Viola’s earnest and entirely doubt-free face, I thought to myself, “Not villain. Rather, first love. Wrong love.”  A hopeful young girl cursed with the cavalier affections of a false Romeo deserves in womanhood a man who will love her so deeply, so powerfully, so profoundly that he will sacrifice everything for her.

Aloud to Viola I said, “Okay, good to know, thanks.”  She was definite, after all, and I suspected I’d have to let her discover her mistake the hard way.

I never needed to tell Jin my plan. He’d figured it out already, and approved.  Guess that’s a pirate for you. 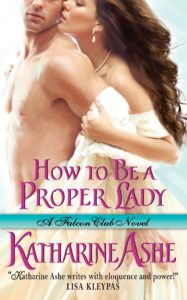 “You’ll come with me,” she said. “Bring Mattie along, if you like. For protection.” She grinned and lifted a single brow. But she did not receive the reaction she expected. Instead of denial or cool indifference, his gaze remained steady upon her and rather warm.

“I do not need protection from you, Viola Carlyle.”

“Our first three weeks out I didn’t see you atop for one sunset,” she replied, “and yet here you have been seven evenings running now, since you kissed me. It can only be because you like to see me.” She cocked her head. “Certain you don’t need protection from me, after all?”

“Why aren’t you at the helm. That is where you like to be at dusk, is it not?”

“Trying too hard to get rid of me now. That’s interesting.”

“If you say so.” His mouth tilted up at one edge and for a moment the sinking sun seemed to flare upon the horizon, shooting sparks into the darkening sky above.

This was strange, knowing one another’s habits as sailors on the same vessel always did, yet not really knowing anything of him in truth. Most of her crewmen confided in her, seeing in her a sister or daughter, even a mother. But this man kept his own counsel. The Pharaoh, she suspected, needed no confidant. The cut of his jaw and cast of his features, the manner in which he held himself, square-shouldered and in command—these bespoke a man of thorough independence.

She knew nothing of Jinan Seton except that his rare smile… made her see stars.

She saw stars when he smiled.

She blinked it away.

“My first few years aboard ship, it was the only time of day Fionn allowed me up there.” She lowered herself to the bowsprit, her behind settling onto the beam’s curve. He watched without expression. But it was her ship and she could sit where she wished. And she wished to sit with him in the sunset.

And perhaps if she sat here long enough, he would smile again.

“I have very fond memories of that time,” she added.

“They are not your only fond memories.” It was not a question.

He waited, as he always did. He was quite good at being silent and listening. She had never been, not from her girlhood. The quiet, dreaming daughter had been Serena, a perfect complement to Viola’s madcap energy.

She looked off to the glistening horizon.

“Dusk is special.” She liked to be atop at dusk, for then the sunset shivered through her and made her feel weak with lonely longing. It was the time of day that seemed least safe, when no matter which direction the April’s bow pointed there seemed no secure port in the sightings, no home ahead. At dusk Viola could stand upon her quarterdeck and feel weightless and directionless beneath the changing sky, as though she might fly away at any moment, or simply disappear into the colors above, swept away with the winds. She imagined at those moments that only her grip on the helm bound her to the deck. To reality.

It was nonsensical. And it was the way Jinan Seton made her feel. 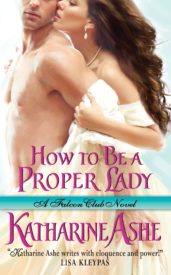 is Book 2 in the Falcon Club Series

Everything fans of historical romance could want in a book.

From prologue to epilogue the story held me rapt.

I ADORED this book.

I was swept away by their passionate and headstrong romance. With lush and rich descriptions of exotic locations in the Caribbean, charming and humorous secondary characters, and two fiercely independent individuals, How to Be a Proper Lady may just be Ashe’s best novel yet.

— The Librarian Next Door