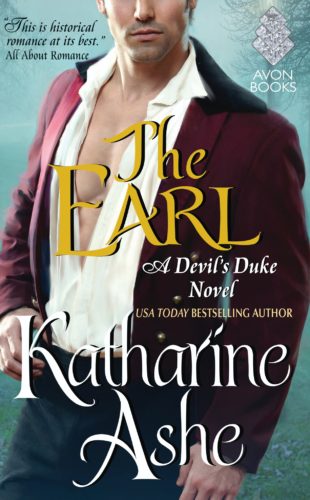 How does a bookish lady bring an arrogant lord to his knees?

Entice him to Scotland, strip him of titles and riches, and make him prove what sort of man he really is.

Handsome, wealthy, and sublimely confident, Colin Gray, the new Earl of Egremoor, has vowed to unmask the rabble-rousing pamphleteer Lady Justice, the thorn in England’s paw. And he’ll stop at nothing.

Smart, big-hearted, and passionately dedicated to her work, Lady Justice longs to teach her nemesis a lesson in humility. But her sister is missing, and a perilous journey with her archrival into unknown territory just might turn enemies into lovers.

DESERT ISLE KEEPER: "This is historical romance at its best."

I write novels the way I read novels: total immersion.  This means that sometimes I stay up all night writing.  Despite other tasks I must attend to (like walking the pup, sending my son to school, teaching class), sometimes I’m so deeply swept away in the rushing, raging, riotous flow of the love story that I simply cannot drag myself away until I’m literally falling asleep over the keyboard.  When I’m writing a novel like this I write every moment I can, and I stay up all night… and then all day… and then all night… and then…

You get the idea.

Writing The Earl was a white-water-rapids ride like that.

There were two reasons for this.

First of all, it’s a road trip story, and I adore writing road trip stories set in places I’ve fallen in love with.  While researching and writing the Falcon Club series I visited Scotland several times, including twice for The Earl.  On one trip I mapped a course for Lady Justice and Peregrine’s flight through the Scottish countryside from the angry mob chasing them.

The second time I went there to actually trek that route myself; I wanted to have a total sensory experience of everything about the journey, from terrain to landmarks to weather to scents, textures, tastes and sounds.  Scotland is a breathtakingly beautiful country of emerald hills, ancient fortresses, lakes that reflect brilliant blue skies serrated with clouds of every hue of white and gray.  Its villages boast cozy pubs and storybook perfect tearooms, its people are welcoming and warm, and its countryside and cities alike are chock full of history and laughter.  I love this land, and I poured every ounce of that love into Lady Justice and Peregrine’s race across the countryside.

Secondly, by the time I began writing The Earl I had already known this heroine and hero for years.  From the moment I conceived of the Falcon Club series I had been reveling in every public interaction between the fiery pamphleteer and her arrogant aristocratic critic, and growing thoroughly attached to their slow-burn enemies-to-lovers story.  I knew that when they finally met in person their attraction had to be about more than the undeniably delicious friction of opposites clashing — and delectably crashing — together.  It had to be about passion: the passions of desire and hurt, need and pain, tragedy and profound joy. For in planning their love story I had always known that, unbeknownst to both Lady Justice and Peregrine, the two adversaries had once long ago been childhood best friends, with a bond more powerful than any others.

Stepping away from writing a story like this is impossible.

That is how the spirit of a novel can impel me.  With the landscape of Scotland inspiring me, and with my hero and heroine’s intimately entwined history to reveal, and all of their hurt to transform into healing — not to mention lust into love — once I set fingertips to keyboard to write this romance, I couldn't stop writing until these lovers got their gloriously well deserved happily-ever-after. 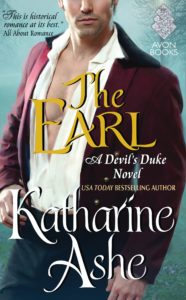 The moon had ceded the night to the stars when she arrived at the meeting place they had agreed upon via letter: a small ancient cemetery surrounded by a fence and hedges on a street still busy with carriages and horse traffic. A long black cloak and veil aided the dark in disguising her.

Her coachman walked beside her, a hood drawn around his face as well, but he would not accompany her to the meeting. For all his taunting, Peregrine did not frighten her. A man who dedicated his leisure time to rescuing strays was unlikely to harm a lone woman.

The cobbles shimmered with an earlier rain as she gestured for Jonah to remain across the street. Lamps lit this part of London irregularly, and the break in the wall was in shadow. Beside the gate stood an enormous man.

“Ma’am.” The behemoth bowed. “He awaits you within.”

It was immediately clear why he had suggested this place. The thick hedge within the walls created a bower of privacy and the gravestones scattered unevenly throughout made swift escape impossible.

He had staged the situation to his advantage too. He stood among the stones not four yards away, a lamp on the ground behind him casting him in silhouette. He was tall, and the breadth of his shoulders and solid stance suggested a man of fine physical conditioning. The night was mild and he wore no hat or overcoat—nothing to disguise him.

He was entirely willing for her to know his true identity.

The gate creaked closed behind her.

“Good evening, madam,” he said into the darkness. “It is a pleasure to finally make your acquaintance. I have looked forward to this moment for years. But, of course, you already know that.” His voice was smooth and low, far from menacing, rather intimate, and shockingly, unbelievably, horribly familiar.

Only hours earlier this elegant voice had proposed marriage to her.

“I am Gray,” he said. “Now remove that veil and tell me your name.” 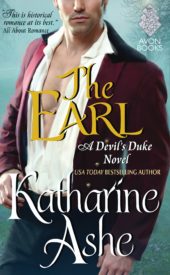 is Book 2 in the Devil’s Duke Series

is Book 5 in the Falcon Club Series

A smart hero, an even smarter heroine, and a fast-paced plot all keep the reader rushing through this excellent historical romance…that proves smarts are the sexiest attribute of all.

"A tender and gripping romantic adventure... Fast-paced and fun with a poignant storyline"

A masterstroke... An exciting adventure and a sizzling romance all wrapped up in astute observation and social comment, this is historical romance at its best and it’s gone straight on to my keeper shelf.

Ashe deftly balances the nonstop action and adventure in the plot of her latest elegantly written, Regency-set historical... with an equal measure of sensually supercharged romance.

Best Books of the Month!