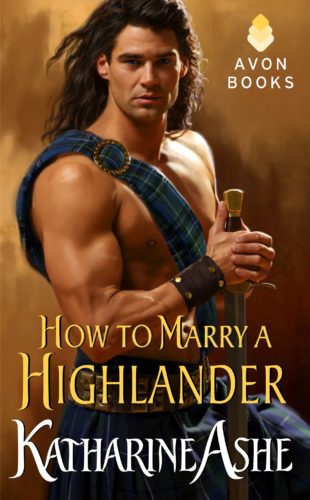 Book 3.5 in the Falcon Club Series

An intrepid lady takes on an impossible task to win an irresistible lord.

With seven troublesome half-sisters to marry off, Duncan, the Earl of Eads, has one problem: he’s broke. With the prospect of marriage to the pompous local curate, Miss Teresa Finch-Freeworth has one dream: to wed the handsome Highlander she saw at a ball.

How does a desperate lady convince a reluctant laird that she’s the perfect bride for him? She strikes a wager! If she can find seven husbands for seven sisters, the earl must marry her. But when Duncan gives her a deadline even the most audacious matchmaker can’t meet — one month — Teresa sets terms too: with each bridegroom she finds, the earl must pay her increasingly intimate rewards… 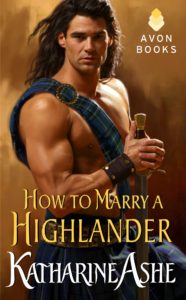 Six pairs of eyes stared at her as though she wore horns atop her hat. She was astounded she had not yet turned and run. Her cheeks felt like flame, which was dispiriting; when she blushed her hair looked glaringly orange in contrast. And this was not the romantic setting in which she had long imagined they would again encounter each other—another ballroom glittering with candlelight, or a rose-trellised garden path in the moonlight, or even a field of waving heather aglow in sunshine. Instead now she stood in a dingy little flat three stories above what looked suspiciously like a gin house.

But desperate times called for desperate measures. She gripped the rim of her bonnet before her and tried to still her nerves.

The sister that had gone to fetch him reappeared in the doorway and smiled. “Here he is, then, miss.”

Then he was standing not two yards away, filling the doorway, and . . .

Even if words had occurred to her, she could not have uttered a sound. Both her tongue and wits had gone on holiday to the colonies.

No wonder she had dreamed.

From his square jaw to the massive breadth of his shoulders to his dark hair tied in a queue, he was everything she had ever imagined a man should be. Aside from the neat whiskers skirting his mouth that looked positively barbaric and thrillingly virile, he was exactly as she remembered him. In seeing him now, indeed, she realized that she had not forgotten a single detail of him from that night in the ballroom.

But more than his eyes and muscles and all those other manly bits of him drew her. Much more. The very fibers of her body seemed to recognize him, as though she already knew how it felt for him to take her hand. Just as on that night eighteen months ago, now an invisible wind pressed at her back, urging her to move toward him, like metal drawn to a magnet. As though they were meant to be touching.

Despite the momentous tumult within her, however, Teresa could see quite clearly in his intensely blue eyes a stark lack of any recognition whatsoever.

“Weel?” The single word was a booming accusation. “Who be ye, lass, and what do ye be wanting from me?”

It occurred to Teresa at this moment that she could either be thoroughly devastated by this unanticipated scenario and subsequently flee in utter shame, or she could continue as planned.

An image came to her: herself kneeling at the Reverend Elijah Waldon’s feet, offering his slippers while he sat in his favorite chair before the fire reading from Butler’s collected sermons.

She gripped her bonnet tighter.

“How do you do, my lord? I am Teresa Finch-Freeworth of Brennon Manor at Harrows Court Crossing in Cheshire.” She curtseyed upon legs that felt like pork aspic.

His brow creased. “And?”

“And . . .” It was proving difficult to breathe. “I have come here to offer to you my hand in marriage.”

Complete stillness from the man and seven women staring at her.

“Why, Duncan, ye old trickster,” a sister exclaimed. “Ye’ve gone an found yerself an heiress to surprise us!”

“I’m not an heiress.” It was only the second truth Teresa had spoken in a weeklong spree of creative inventions. She’d told her parents that Diantha had invited her to town for a visit.

She stepped forward, her heartbeats atrociously uneven. All eyes turned to her, including his, beautiful and so blue—like the most vibrant autumn sky—that it was difficult to think.

“I will have a marriage portion,” she said. “But while it is not shabby, it is not by any means a fortune.”

“How much is it?” a sister demanded.

“Dinna be missish, Elspeth. If our brither’s set to wed her, we should all ken hou much money she’ll bring to the family. We’ve anly got one chance at this.” Sorcha’s black hair was pinned tight to her head. Of the seven plain gowns in the room, hers was the plainest.

“Well.” Teresa bit her lip. “I don’t know exactly how much it is. I only know that my mother, who spends far beyond her allowance every quarter, seems satisfied with the amount. So, I—”

He took a step toward her. “I’m no set to wed anybody, Sorcha.” He looked directly at Teresa. “As this lass knows.” He tilted his head. “Dinna ye, miss?”

He was so large, his shoulders and arms straining at the fabric of his rather shabby coat and the muscles in his thighs defined in trousers that had probably seen too many seasons.

She was staring at his legs. Her gaze snapped up.

Her breath caught somewhere in the region of her ankles. The slightest crease had appeared in his right cheek.

“You are not set to wed me, of course,” she managed. “But I hope you will consider it.”

A gasp sounded from a sister of no more than seventeen. “Are ye a doxy then, miss?”

“Dinna ye remember? Mither was always going on an on about Father’s doxies an hou they always wanted him to keep them like little goodwifies in their own houses an such.” Effie brushed a lock of curly hair from her eyes to peer more closely at Teresa. “Mebbe our brither’s more like Father than we kent. Are ye our brither’s doxy, miss?”

“No!” she exclaimed at the same moment the earl said, “No.”

She looked at him hopefully. Hidden within his scowl, a grin seemed to lurk. But she was certainly imagining that. A gentleman would not find such a thing amusing.

The one that had fetched him, who was about Teresa’s age with eyes like her brother’s, moved toward the door.

“But I want to stay an see what he says,” Effie complained.

“Me too.” This one was near enough in appearance to be Effie’s twin but smiling with an open friendliness at Teresa.

“Come on nou. Ye heard our brither.” Una lifted a brow at the earl. He shook his head almost imperceptibly and returned his attention to Teresa.

Taking up threadbare cloaks and dart-mended shawls, each sister gave Teresa a curious perusal and headed out the door. Then she was alone with the man she had been dreaming of kissing her and touching her for eighteen months. But now that he stood before her, big and muscular and handsome and studying her intently, he was again abruptly a real man and not only a distant fantasy.

She didn’t know what she had expected him to say, but this wasn’t it.

“I—” She cleared her throat. “I told you.” Her palms were so wet that her bonnet was slipping from her fingers. “I have marriage in mind.” And kisses. And touches of the most intimate sort.

He lifted a hand to his chin and his fingertips scratched the whiskers skirting his mouth. “Yer an odd one to be sure, lass.”

He swept her figure briefly. She wore her green and ivory pinstriped muslin with the lace collar and tiny sleeves to draw out her mossy eyes and show off her arms. She had even artfully draped a delicate shawl of cream fringe over her elbows. Earlier when she departed Diantha’s house claiming she was going to the shops she’d felt perfectly fetching.

Lord Eads did not appear impressed.

“Aye.” He nodded. “I’ll no doubt yer a gentleman’s daughter.”

“You needn’t doubt anything I say,” which was certainly a first for her with anybody and felt very odd indeed. “I am whom I have said and I wish only what I have indicated.”

“Anly, hm?” His eyes narrowed. “Lass, a leddy that walks into a stranger’s flat an—”

“You are not a stranger. Not—that is—a complete stranger.”

He tilted his head.

“You saw me at Lady Beaufetheringstone’s ball a year and a half ago.” Fire erupted in her cheeks. “You stared at me. And I . . .” She couldn’t breathe. “I stared at you.”

He stepped toward her. Up close he towered. Then he did what she’d been dreaming about for months: He touched her… 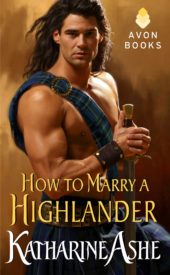 is Book 3.5 in the Falcon Club Series

A brilliant historical romance novella. I loved it!

Bright, bubbly, and a whole lot of fun... sweeps readers off their feet... The story simply brims with energy.

This novella is an adventure beyond just being a romance between two people, it's matchmaker heaven.