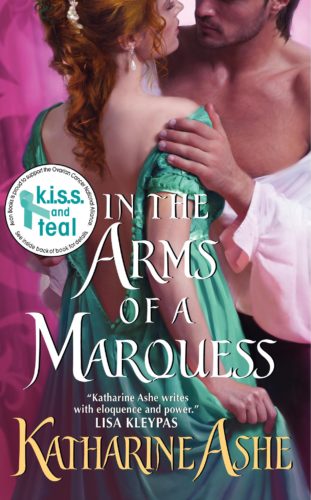 Book 3 in the Rogues of the Sea Series

A mysterious lord risks all to save the only woman he ever loved.

She had never forgotten him…

Miss Octavia Pierce is witty, well off, and shockingly unwed. Still, she is far too successful in society to remain on the shelf forever, and her family has hopes that Octavia will finally make the perfect match. What they do not know is that years earlier Octavia was scandalously tempted by the one man capable of sweeping her off her feet—the man now known as the Marquess of Doreé.

He’ll do anything to save her.

A third son, never meant to inherit, Lord Ben Doreé has abandoned his past and grown accustomed to his illustrious new position of wealth and power. But he has never forgotten Octavia, and now she desperately needs his help in a most dangerous, clandestine matter. Although she claims she has put the memories of the passion they shared behind her, Ben is determined to once again have her in his arms—and in his bed. 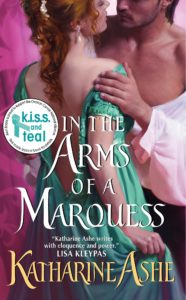 “My father did not have a taste for European art,” he said close behind her, sending nerves glistening along her spine. “My eldest brother expanded this collection. He was quite fond of classical subjects.”

“I see.” She did not pause to study the pieces, catching only a glimpse of a reclining Gaul, his impressive musculature covered by a miniscule loin cloth, and an amorous Cupid and Psyche locked in an embrace in which the god’s hand rested upon his lady’s breast.

Tavy squeezed her eyes shut. This could not be happening. How could she have agreed to this? Any of it?

Cheeks aflame, she strode to the opposite door. It opened onto a ballroom. Pristine white walls rose to the second story, a carved balustrade running its length offering a view from above. A chandelier draped from the white-washed ceiling, hundreds of tiny crystals reflecting the sunlight filtering through the windows, sparkling upon floorboards like a thousand diamonds. It was a spectacular chamber but in all its glory cold as ice.

She turned. He stood at the threshold, watching her.

“I beg your pardon,” she said quickly. “I am sorry to intrude on your party. You did not invite me and I cannot imagine that—”

“My sister begged me to accompany them. With their son so new, you see, she is quite anxious and requires a great deal of comforting. I could not refuse her.”

“You are welcome here.”

Of course. Why would it matter to him whether she was in his house or in Timbuktu? He hadn’t cared for her whereabouts for seven years. He certainly would not care now, as his calm demeanor suggested. The anxious anticipation Tavy had nursed for days abruptly deflated, leaving only the awful, humming awareness of his presence.

He did not advance into the chamber, but his gaze remained steady upon her. Tavy’s heartbeat sped, her hands damp. She should have remained in London. She could not bear this, the memory of wanting him beside the newness of knowing him again so perfunctorily. And he was not making it any easier on her, his black eyes intense and distant at once.

She turned away, searching for words in the heavy swags of white and silver fabric framing the floor-to-ceiling windows. Elegant, all of it. So cold. So English.

“Do you ever miss it?” Her quiet voice echoed across the ballroom. “Home?” Stomach tightening, she glanced over her shoulder.

He shook his head, twin lines appearing between his brows. “No.”

Outside the windows, the park stretched toward a copse of trees, their leaves mottled with the ripening of autumn, so unlike the tropical paradise she had lived in for nearly a decade.

“Still in the thrall of the exotic, shalabha?”

She pivoted around. He stood very still, the word lingering between them, the nickname he had given her in another lifetime, but said so differently. Not warm and playful as she remembered it, instead now with a sharp edge. His eyes were dark as coal, and wary.

Tavy steeled herself against the sinuous pressure of unwanted emotion rising in her. She did not want to go back, to remember everything, no matter what the temptation. She wanted to pretend that he was the stranger he seemed now, that she knew no more of him than his reputation and position in society.

She did not know him. She never had. She needn’t pretend.

“No.” Her voice cracked, words escaping despite her will. “It was not like that. Perhaps at first. But then I—” Her throat was parched. The empty space between them stretched like layers of mistrust.

He walked toward her.

Fear rushed through her, wholly primal, and she balanced on her toes, ready to flee. He halted within inches and she had to force herself not to retreat, dragging up her gaze to his handsome face. Awareness that he was a stranger flooded her anew, a man, tall and more solid than when she had known him, with tiny lines about the corners of his mouth that had not been there before, his brow severe.

But something shimmered in his eyes behind the shadows shrouding the black. Something she used to see there when he called her by that pet name. Something that now, just as then, made her heart stumble and her knees turn liquid.

“I—” She struggled for breath, but he seemed not to breathe at all, his body a rigid wall.

His hands came up to either side of her face but not touching, as though he did not wish to do it, his arms locked and jaw hard. Like a silent dance he shaped the air around her, spreading warmth upon her skin that penetrated then stole beneath. His gaze scanned her features, fraught and fast. His chest rose hard.

With every mote of skin and blood sparking and alive from his nearness, Tavy panicked. She stepped back.

Ben grasped her wrist, pulled her forward, and joined their mouths. 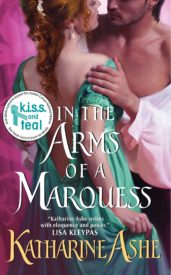 is Book 3 in the Rogues of the Sea Series

Every woman who ever dreamed of having a titled lord at her feet will love this novel.

Immersive and lush… a lovely measured yet passionate dance that glows brightly against the dark shadows very much in evidence at that time in England. I have never been disappointed in a Katharine Ashe book. She is that rare author who chooses to risk unexpected elements within an established genre, and whose skill and magic with the pen lifts her tales above the rest.

More intrigue and emotion than I have experienced in a book in a very long time… It reaffirms both the belief in love at first sight, and love conquers all, a tall order for a romance novel. I loved it from beginning to end.

A superbly crafted story, teeming with misunderstandings, intrigue, clever repartee, complex and compelling characters, steamy hot love scenes, betrayal and a forever after kind of love… I highly recommend In the Arms of a Marquess.

Captivating… In the Arms of a Marquess is perfection… Ashe’s characters come to life not only in their provocative and lush setting but in the generosity of their witty dialogue.