Book 1 in the Rogues of the Sea Series

A society jade thinks she’s done it all… until she meets the devil himself dressed in priest’s clothing.

When pirates storm Lord Steven Ashford’s ship upon the high seas, it brings him closer than ever to the nefarious criminal he seeks to ruin. Only one seductive detail threatens his victory: the scandalous beauty imprisoned with him, Lady Valerie Monroe. Temptation has never been so intoxicating or so forbidden, for Steven is disguised as a French priest. If they reach the ship alive, to protect her from his enemies, he must never see her again…

Back in England, and under the ton’s scrutiny for a reckless past she hasn’t escaped, Valerie dreams of the breathtaking “man of the cloth” with whom she shared her greatest adventure. Then he reappears in society under his true identity, Viscount Ashford, but despite the danger their consuming passion cannot be denied. Now standing in the way of their desire are Valerie’s wounded heart, Steven’s lone destiny, and a villain that will stop at nothing to crush them both.

"A breathtaking romance filled with sensuality and driven by a brisk and thrilling plot. Katharine Ashe writes with eloquence and power."

That’s how I came to write my debut novel Swept Away by a Kiss more than a decade ago.

The epic, sweeping love story of a titled English nobleman in disguise as a ship’s captain who's in disguise as a French priest, and the smart and tenaciously passionate woman who falls in love with him despite all, came about through a wild blending of inspirations.

At the time I wrote the first draft of this novel I was living in Rome, Italy, spending my days in the Vatican Library researching and reading about history, and my nights writing about what I’d learned. I adored the work, but it was challenging — lots of translating texts in foreign languages (some dead!) and deciphering manuscripts that monks had copied by candlelight hundreds of years ago. Occasionally when I needed to loosen my tensed shoulders and stretch my cramped legs, I took short breaks by walking around the beautiful park nearby. Sometimes I paused for a tramezzino (a little snack sandwich) or a quick game of pool with friends.

Mostly, though, I studied, and I wrote history.  I was determined to become a professor and I had a very limited time in Rome. I had to make every hour there count.

Sometimes, though, not only my legs and shoulders but my brain needed relief from its constant occupation.  So, as we book lovers do when we need to relax, I read other books.

Here’s what I happened to be reading when the idea for Swept Away by a Kiss occurred to me: “traditional” Regency romances by Mary Balogh and Mary Jo Putney, a huge multi-biography about the Jesuits written by a Frenchman, and my husband’s book manuscript on the history of the Haitian Revolution. Toss in the influence of two movies I’d seen recently — The Scarlett Pimpernel and Pirates of the Caribbean — and all the pieces of my first full length novel came together.

For those of you who’ve already read Steven and Valerie’s romance, I suspect this backstory comes as no surprise to you. For those of you who are about to read it for the first time, you’re in for a truly unique and passionate adventure. Enjoy! 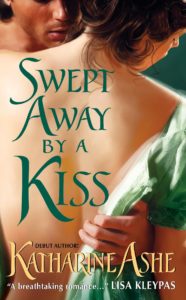 A metallic click sounded on the other side of the chamber. Steven stilled, his muscles tensing, gaze flickering to the sword propped against a chair, close enough if needed. The bronze door handle glinted in the firelight as it turned. A crack of light from the corridor lit the threshold. Valerie slipped inside and closed the panel behind her, pressing her back against it and turning the key in the lock.

“You are here,” she said, her voice breathless but level. Of course it was level. She was no shrinking violet, especially not when engaged in a daring escapade.

Steven commanded his racing pulse to steady. Her color was high, her shimmering gown taut across her perfect breasts, her eyes luminous in the firelight. If only he had a knife handy. It would be easier, after all, to cut out his heart right away than to endure the torture he suspected was about to come.

“Indeed I am,” he said coolly, leaning against the mantle. “It is half past one at night and this is my bedchamber. The issue, however, is not whether I am here, but that you are.”

She moved forward a step. Her gaze shifted around the chamber, then to the dressing room door before returning to him squarely. “Are you alone?”

“What are you doing here?” His voice was hard, but Valerie expected that. He stood in his shirtsleeves and trousers, the creased page of a letter in his hand. The fire illumined the chamber with wavering light, gilding his hair and casting his skin in a warm glow. His eyes were icy.

“The door was unlocked.” Her heart slammed against her ribs.

“That hardly gives you leave to enter uninvited.”

“It seems careless of you not to lock it.”

“Your presence here proves it. What do you want?”

Valerie had silently practiced her speech all evening, searching out the opportunity to give it to him. When the party dispersed, she determined to see it through even if it meant this. But now that she was here, with him before her, breathtakingly handsome in the fire-lit intimacy of his bedchamber, her thoughts tangled. The only honest answer she could give was that she wanted to be in his arms.

“I want the same thing you want.”

He hesitated only the briefest moment before replying, “Do not presume to know what I want.”

But the missed beat sufficed for Valerie. Now the Marquess of Hannsley, Alistair Flemming, and the entire underworld of villainy would have to wait. This was not the opportunity she had sought for a day, but the one she had ached for since she first saw Etienne La Marque. 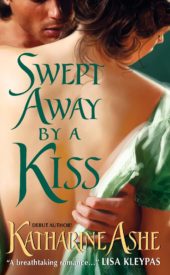 is Book 1 in the Rogues of the Sea Series

An incredible romance with enough sexual chemistry to singe your fingers. The characters are complex and highly sensual, the plot riveting and the backdrop vividly detailed. This is both a page-turner and a keeper.

Ms. Ashe has taken the extra step and given her readers a twist of originality... A breathtaking romance.

This unforgettable tale will dazzle you.

This is on my favorites list, which includes Lisa Kleypas, Julia Quinn and Eloisa James… The sexual tension between the two is nothing short of amazing, beautiful and steamy.

— The Season for Romance