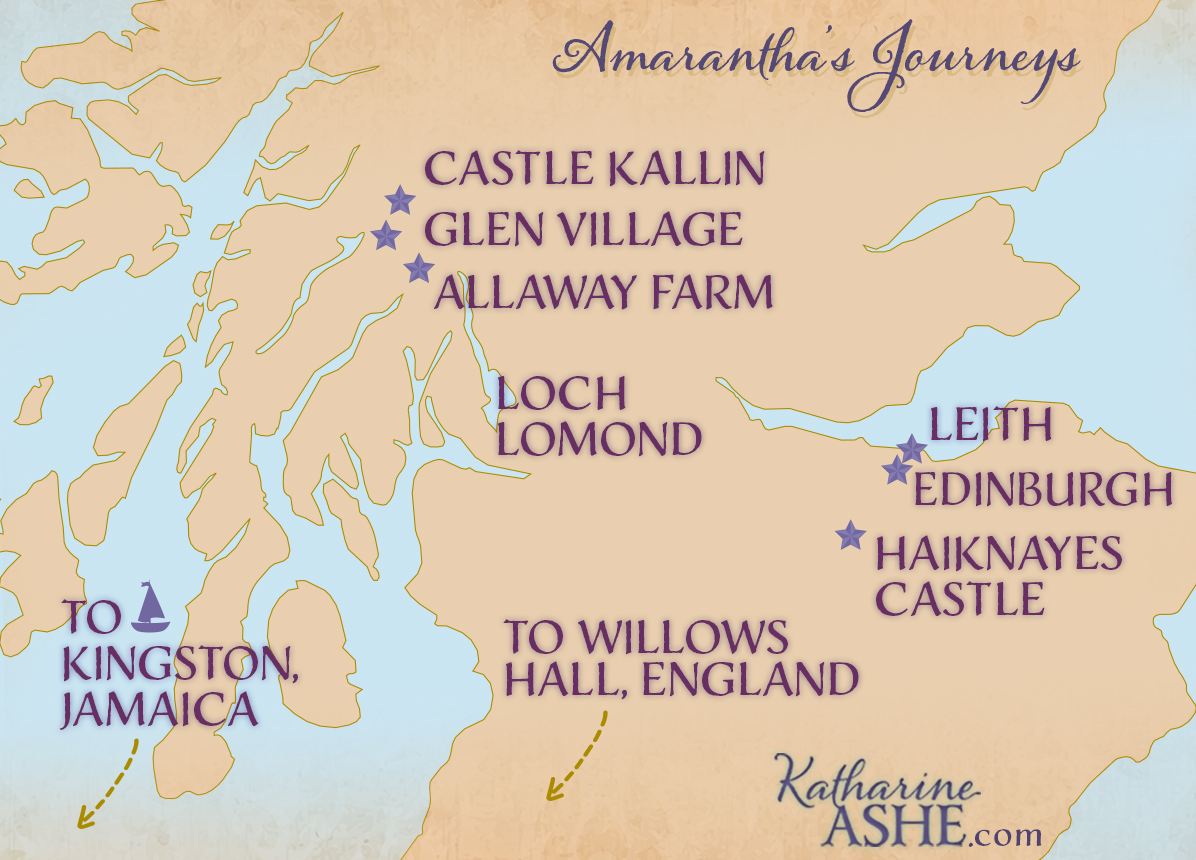 In The Duke, Amarantha travels a lot! Here are the most significant stops on her journeys in Scotland, and along Gabriel’s travels as well. This map also includes Loch Lomond, the left bank of which Lady Justice and Peregrine traverse in The Earl.

Many thanks to Mary Brophy Marcus for the fabulous idea and design concept for this map, and to Jenn Zapf of Waxcreative Designs for the gorgeous execution of it.

1) While I was researching When a Scot Loves a Lady, a gorgeous bartender in a cozy pub in Edinburgh taught me how to enjoy whisky. (Scots spell whisky without the “e”, which he also taught me.) Also, the bartender turned out to be a rock and roll guitar player in a band.

END_OF_DOCUMENT_TOKEN_TO_BE_REPLACED

Wonderful Vanessa Kelly invited me to interview Corinna Mowbray and Ian Chance, the heroine and hero from My Lady, My Lord, for her readers. Corinna thinks it’s a great idea. She hosts a fashionable, elite salon in London, and enjoys conversing on all sorts of subjects. The trouble is, when we suggested it to Ian, he… well… he squared his handsome jaw and headed toward the card room.

END_OF_DOCUMENT_TOKEN_TO_BE_REPLACED

He noticed them and he could not forget them.

But that story was not theirs. It went along its way, leaving them stealing glances at one another, tongue-tying him when their gazes met yet offering him no opportunity to become un-tongue-tied.

END_OF_DOCUMENT_TOKEN_TO_BE_REPLACED

To write my Rogues of the Sea trilogy I did quite a fair bit of research about pirates. So I wrote a little piece about a typical day in the life of a buccaneer for the lovely folks at RT Book Reviews. The trouble was that as I wrote it, Alex Savege, the hero of Captured by a Rogue Lord, kept adding his observations. Here I offer you the result: my summary, with a rakish earl’s commentary on the life of a pirate.