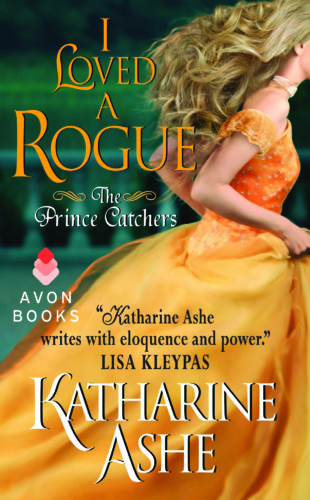 Book 3 in the Prince Catchers Series

She’s a proper miss, destined to marry a prince. Then why can’t she resist the seduction of a rogue?

She can pour tea, manage a household, and sew a modest gown. In short, Eleanor Caulfield is the perfect vicar’s daughter. Yet there was a time when she’d risked everything for a black-eyed gypsy who left her brokenhearted. Now he stands before her — dark, virile, and ready to escort her on a journey to find the truth about her heritage.

Leaving eleven years ago should have given Taliesin Wolfe freedom. Instead he’s returned to Eleanor, determined to have her all to himself, tempting her with kisses and promising her a passion she’s so long denied herself. But if he was infatuated before, he’s utterly unprepared for what will happen when Eleanor decides to abandon convention — and truly live… 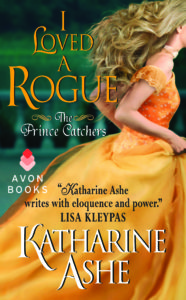 Eleanor held the porcelain cup to her lips and inhaled until she felt it in her toes.

Mrs. Hodges plunked her hands on her hips. “Well, aren’t you going to drink it?”

“I am reveling.” Her lips could nearly taste it. Nearly. Temptation. The waiting teased. Deliciously.

“Not usually.” She tilted the cup upward. “Usually I am entirely predictable. Reserved. Modest.” Her words were muffled by the rich liquid so close, heating her flesh. Heady sensation. “Usually I am very”—she let the chocolate wash against her lips—“very”—and a ripple of pleasure went through her—“good.” It stole around her tongue. Decadent. Sinful.

Taliesin appeared in the kitchen door.

“Well now, sir,” Mrs. Hodges said, wiping her hands on her apron. “Miss was just teaching me here how to make chocolate like they do at all the big houses.”

He leaned a shoulder into the doorpost and crossed his arms. His shadowy eyes scanned her from toe tips to brow, finally coming to rest on her lips. “Was she?”

A thick droplet of chocolate clung to her bottom lip. Eleanor felt it there like a beacon. She should wipe it with her kerchief.

The tip of her tongue stole between her lips and licked up the droplet. Another shiver wiggled through her.

What was she doing?

“Now then, miss,” Mrs. Hodges said, “you’d best go and leave the kitchen to me, and I’ll fix up a nice dinner for you.”

Clutching the cup in both palms, Eleanor went to the door. Taliesin stepped back but with so little space she had to shift sideways to move past him. She darted a glance upward.

Immobility. His. Hers. She could see every line, every whisker that had not been on his face eleven years ago. Not the same boy she’d known. A man now. Her pulse fluttered. Then it fluttered harder as his scent mingled with the flavor of chocolate upon her tongue. Horse. Leather. Him. The same. It tangled in her nose, in her head, a memory barreling through her, while he watched her eyes from inches away.

She slipped past him.

The taproom was empty now. Mr. Treadwell was probably in the stable seeing to his Arthurian characters and Betsy must be in their room seeing to mundane tasks Eleanor was accustomed to seeing to herself.

“Chocolate?” the incubus behind her said. “Missing the luxuries of the ducal mansion so soon, are you?”

She swung around to him and the chocolate sloshed in the cup. “Is that what you think? That I have grown spoiled by my sisters’ good fortune?”

“No.” His black eyes hooded.

“No? Is that all you can say?” Her tongue, it seemed, was an unbridled thing. Too much prison. Too much feeling to swallow again and again. “We’ve not seen each other in eleven years, and now for four days you have said nothing to me.”

Again he leaned his shoulder against the doorpost in an attitude of sublime nonchalance. “You made it clear you did not wish my escort. I am respecting that.”

She didn’t believe it. He had never respected her. He had teased her endlessly. “You could at least speak to me.”

“What would you have me say?”

“Anything. How do you go along these days, Eleanor? How is the parish? Is it still the same as eleven years ago when I departed so precipitously, without warning, without word?”

His face grew still, planes of dark beauty like hewn marble. “Ah,” he said in a low voice. “You wish for empty pleasantries. Or perhaps an apology? I regret that neither is in my lexicon.”

“I don’t wish for pleasantries or apologies. I don’t care why you left as you did. But you hurt Papa. Do you even know how deeply you hurt him?”

His lips were an unbreakable line.

“He wouldn’t even speak of you.” Locked behind bars for years, Eleanor’s words now tumbled forth. “He said nothing except when Ravenna mentioned you. She did not understand why you left either, but she accepted it in her way. She always thought you would return. But Papa didn’t. And it wounded him.”

“I wrote to him,” he said after a moment.

“Rarely. So few letters that the pages grew thin from folding and unfolding. He never said a word about them or read a line to us, but do you know where he kept them? In his Bible, tucked in Luke, chapter fifteen. The story of the prodigal son.”

His eyes had become hard obsidian. But he remained silent.

Her hands clenched around the cup. “Why won’t you speak?” she exclaimed.

“Seems like you’re speaking enough for the both of us.” His perfect lips barely moved.

“Can’t you even be civil? Or did you leave those lessons behind too when you left St. Petroc?”

“Listen to you. As righteous as you always were.”

She threw the chocolate at him.

She didn’t know quite how it happened. One moment strange, frantic panic coursed through her, straight from her heels to her throat. The next moment a demon possessed her, seizing her arm and forcing it to jut forward and disgorge the contents of her cup at him. Chocolate spattered everywhere—on the wall, the doorpost, and on the dark, handsome man from her past for whom she had wept months of tears.

“What in the—” But he didn’t finish. Instead he came at her. Her foot dropped back but he grabbed her wrist and jerked her hand with the cup up between them. “What do you think you’re doing?” Chocolate dripped down her wrist and along his cheeks and lips. He stared down at her in astonishment.

“Wasting my chocolate.” She tugged. His grip tightened. Arm to arm, he held her close, and he did not look into her eyes. He looked at her lips. The shadows in his eyes were deeper, but now limned with fever brightness, so bright that she could see the flecks of brown there that she had discovered as a girl.

“How do you go along these days, Eleanor?” His voice was rough.

“How is the parish?” His gaze never left her lips, his fingers strong around her wrist. “Is it still the same as eleven years ago when I departed?”

“Precipitously,” she whispered. “Without warning. Without word.” The syllables trailed into the silence of her raucous heartbeat.

Through his hand she felt him. Her skin, her bones, her blood felt him.

“What will it be, Eleanor? You demanded my attention. You have it now. Do you want it or not?”

She wanted to taste the chocolate on his lips. She wanted to remember the danger and delirium she’d felt the last time she had been entirely alive. 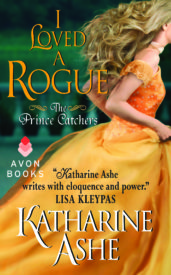 is Book 3 in the Prince Catchers Series

Katharine Ashe's historical romances are rich and inventive, unexpected and smart, and she doesn’t pull any emotional punches. She writes with a wry, provocative, angst-y energy that compels you to keep turning pages, even when it means the thrill of a blissful read will be far too soon behind you. Oh, yeah. This author rocks historical romance… A complex quest plot layered with romance, of course, but also with tragedy, brutality, betrayal, family secrets, class prejudices and a bromance that has me hoping a certain master swordsman named Saint will soon feature in his own happy ever after.

Everything we look for in romance... Taliesin is the perfect blend of aloof alpha hero and tender partner. I ached for him throughout the book... Every time Eleanor and Taliesin hovered on the brink of doing irreparable damage to their relationship, my heart was in my throat.

Stunning and riveting... OUTSTANDING!!… I had such a difficult time putting this one down.

So deeply felt and imbued with such sensuality and longing… Eleanor and Taliesin's story is passionate, heart-wrenching, and thoroughly satisfying, and I loved every minute of it.

— Caz @ All About Romance