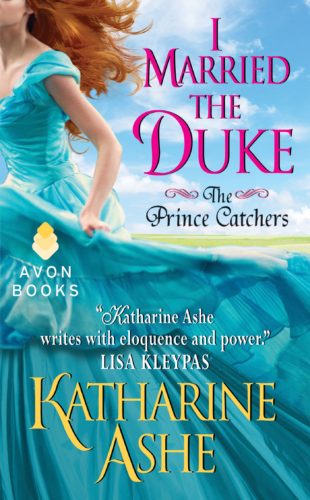 Book 1 in the Prince Catchers Series

She thought he was a pirate. He thought she was a governess. Two wrongs have never made such a scandalously perfect right.

On the way to marry a prince in a castle a lady should never:

But daring, determined Arabella Caulfield isn’t just any lady. And Luc Westfall is no ordinary shipmaster. He’s the new duke of Lycombe, and to defeat a plot that could destroy his family he must have an heir. Now he knows just the woman for the job… and he’s not above seduction to turn this would-be princess into a duchess. 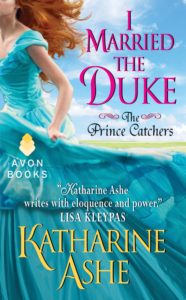 The night was lit with the slenderest crescent moon, the shadows deep across the four yards to the stable. The ocean crashing upon the beach fifty feet beyond the plantane trees drowned all other sounds, like prowling night creatures. Far better than bright moonlight and silence, she told herself. What she could not see or hear would not frighten her.

The stable was dark, but shards of thin moonlight darted across the straw as she opened the door. The horses snuffled in quiet sleep, and the air tasted dry, less salty, more like the earth. It smelled like home, like England. Arabella filled her nose with it, and her lungs.

She found a full bucket of water beside the first stall. She stood for a moment, longing to pour the entire contents over her, and felt confounded.

Her gown would be soaked. Her petticoat too. Even if she washed bent over, she was bound to end up sodden like that night aboard ship.

Her heart did an uncomfortable turnabout.

She could not afford that sort of problem now. For a whole host of reasons.

The horse within the stall stared at her with eyes the color of tea as she shed the blanket, then her gown, petticoat, stays, and stockings, set them neatly aside, went to her knees, and bent her head into the pail.

Cold, blessedly clean water tickled through the matted strands of hair, freeing her scalp. Tiny fingers of pleasure scampered all over. She shivered in perfect delight. After weeks of the tight linen wrap, this was freedom. It felt magnificent. She moaned in pure satisfaction.

Nearby, a man cleared his throat.

She whipped her head out of the bucket, pushed streaming strands from her eyes and clasped her hands to her breasts. She blinked into the dark. “Who is it?”

“You might consider all the wonders of the world, duchess, before you bury your head in the sand.”

Water dribbled along her nose, over her shoulders and between her breasts, trickling down her belly beneath her shift. A little tremor shook her. “You might have announced your presence sooner, Captain.”

“I could claim you acted too swiftly for me to do so. But that would probably be a lie.”

She saw him now, a shadow standing with his back to a stall as though it were perfectly normal for him to stand in the dark in a stable in the middle of the night. As normal as it was for a respectable governess to wash her hair in a horse bucket, she supposed.

“Don’t let me interrupt.” He gestured, and a spot of moonlight caught the gold of a ring on his hand. “I pray you, continue with whatever it is you were doing. Drowning yourself, perhaps? I hope not on my account.”

“You have chosen a poor method for ending it all.”

“I know this from experience, you see.”

She forced disdain to her tongue. “Do go away now.”

He crossed his arms, stationary and large in the shadow. “I was here first.”

She rolled her eyes, suppressing the memory of the muscles in those arms and the way that looking at them made her feel peculiarly tight inside. “Are we nine then, Captain?”

“If we were nine, duchess, I would not wish to remain here.”

Heat rushed up through her in little spikes. “I want to … ”

“I want to wash my hair,” she whispered as though she were about something scandalous. Which of course she was. “But I cannot do it with you watching.”

“I won’t watch. I cannot see you anyway. Not well at least. Pity.”

There was a lengthy silence during which the swoosh of the waves sounded muffled without and the soft rustlings of horses within.

“I will pay you for it.” The rumble of his voice was deep and serious.

The tremor shook her again, this time of regret. Of all men, she did not want this man to wish to purchase her. She did not want him to believe she was a woman to be used and discarded. Foolishly, she wanted him to be different. “I told you—”

“To wash your hair here, now, before me. Only that.”

“You haven’t the funds to pay for a night in this inn or a carriage to the chateau. You haven’t even a change of clothing. Aside from a ring of which I will not speak, you have a cloak, a sorely abused gown, and a cravat my cabin steward has lent you. You cannot intend to enter the castle of a nobleman clad in worn garments, even through the servants’ door. They will expel you as a beggar.”

It was true, of course. But she could not admit it.

“I will pay you sufficient money to hire your room tonight and to purchase new clothing,” he said, “if you continue with your bathing now.”

“Only your hair, Miss Caulfield. And I will remain standing here.”

“Will you also cease interrupting me?”

Her gown was within arm’s reach. She should cover herself. But in order to do so she must first expose herself for a moment. The idea of it sent a wicked thrill through her. This was not how her journey to France to meet a prince was supposed to progress. But for the first time in ages she wanted to feel something. She wanted to allow herself a moment of purely irresponsible and thoroughly unwise pleasure.

“I do not believe you will remain there,” she said hesitantly.

“Then I wish you luck with your bills.”

“Your charity is not so unselfish now, is it, Captain?”

Another pause. “If I offered you gold for doing nothing, would you accept it?”

“You do not trust in charity.”

Arabella had encountered too many men of the world to trust that anyone would ever give her something for nothing.

“Charity always comes at a price,” she said.

“I am offering to pay for your charity now.” He shifted his stance and his voice eased. “Come now, duchess, amuse a sailor who has been at sea far too long with only the beauty of the blue horizon to please him. Allow him to enjoy a beautiful woman. Innocently.”

There was nothing innocent about him. His words teased again now, but he was not a man of light temper, and if he wished to hurt her he could quite easily.

But she did not believe he would. He might have already at any time aboard his ship—when she was drunk and in his arms, in his bed, in his power. But he had not. He had mercy on desperate thieves and he looked at her like a man starved.

“It is a simple transaction, Miss Caulfield,” he said. “You wash your hair, I give you gold. Nothing more. Nothing less.”

In response, he was silent, not even a nod to indicate that she agreed to his salacious proposition.

Arabella turned her face from him, willing her sixth sense that felt him close to obey. What she could not see or hear would not frighten her. 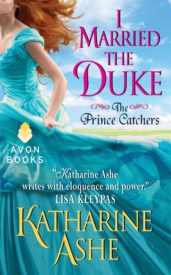 is Book 1 in the Prince Catchers Series

The Prince Catchers series begins with a bang... well written, carefully plotted, and original... an adventure, a romance and a mystery.

Riveting, colorful and so much better for all the twists and turns... highly recommend.

Woven together like a marvelous tapestry. ... It is a joy to read fiction written by someone who apparently knows what she is doing.

Will keep you riveted beyond the final page. It takes mere minutes to become completely invested in the outcome, not just of Arabella and Luc’s tale, but of the entire series.