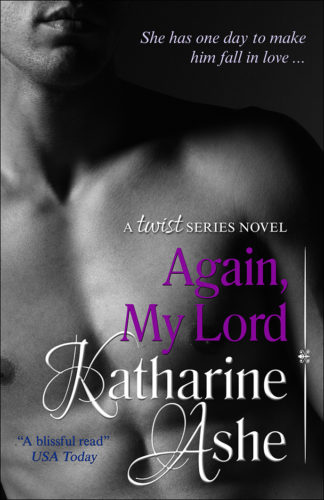 Book 1 in the Twist Series

She has one day to make him fall in love.

The one that got away…

Six years ago, Tacitus Everard, the Marquess of Dare, made the worst mistake of his life: courting vibrant, sparklingly beautiful Lady Calista Chance—until she broke his heart.

Is the only one she wants.

Six years ago, Calista Holland made the biggest misstep of her life: begging handsome, wealthy Lord Dare to help her run away from home—then marrying someone else.

Now, trapped by disaster in a country inn, Calista has one day to convince the marquess she’s worth a second chance, and Dare has one goal, to steer clear of déjà vu. But when the day takes an unimaginable twist, what will it take to end up in each other’s arms?

This series is groundbreaking in the Historical Romance genre… A beautiful love story. 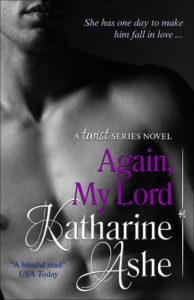 In the middle of the inn yard, shrouded in sheets of rain, her son stood as though paralyzed, eyes and mouth agape at the huge horse galloping straight for him.

“Harry!” Calista leaped forward. But she was too far away, the horse too close, Harry immobile, the rain driving down.

The horse shied, and reared, its hooves pawing the slanting rain above Harry’s head.

Then its master was flying into the air, boots slamming to the ground, greatcoat swirling as he swept forward, fell to his knees and wrapped his arms around Harry, surrounding her son in safety. A shrill whistle pierced the downpour and the horse wheeled away.

Abruptly there was no movement in the yard except the rain pounding on the muddy ground.

Calista ran forward. Harry broke from the man’s arms and flew straight into hers.

“Mama, did you see? Did you? It was amazing!” Words streamed from his mouth as he wrapped his skinny arms around her neck and she gripped his body to hers. “That man saved me from his horse! And then he made it turn away, with only a whistle.”

“Yes.” She pressed the word into his soaking hair, the raw terror of the moment subsiding and making her arms shake. “Yes, darling. What an adventure.”

But he was pulling away already, turning to the rider. Calista rose to her feet, took hold of her son’s hand, and lifted her eyes to the man.

In her life she had hated only one man as much as she had once hated her father and now her husband. Rather, almost as much: Tacitus Everard, the Marquess of Dare.

Now he stood before her, soaked by the sheets of rain that perfectly matched his beautifully intense gray eyes. Still as stone and severe of jaw and stance, he stared at her without speaking as water streamed off the brim of his hat and the cape of his coat. Even with rain washing across his features, he was as handsome as ever: tall and dark and broad-shouldered, with the sort of jaw a woman longed to stroke and lips that stole her reason.

“I beg your pardon,” he said across the rain. “Is he all right?”

A second horseman splashed into the yard and slowed instantly, drawing his mount to a halt and sliding out of the saddle. He tossed the reins to a stable boy holding the marquess’s horse.

“Damn and blast, Dare,” he exclaimed upon laughter. “I would’ve had you if it hadn’t been for that coach blocking that last bend.” He took them all in. “Good Lord, have you run someone over?”

Calista grasped her son’s slippery hand. “Come now, Harry. We must dry you off before you depart.” She drew him back into the inn as he craned his neck.

Evelina stood in the doorway. “It’s him.”

Calista glared at her sister. “No one.” Going to her sodden knees in the foyer she dusted raindrops from her son’s coat, and removed his hat and shook it out.

Her heart twisted anew. Despite the Chance spirit he’d been born with, he had learned to be docile from necessity.

Ignoring every lesson about stalwart strength in the face of adversity that she had taught her son over the past five years, she wrapped her arms around him again and pressed her face into the crook of his shoulder.

“I will miss you, my darling,” she whispered fiercely.

She drew away. “Now, listen to your aunt and Grandmama this month.”

“Yes, and to Cook, so she will bake your favorite biscuits and allow you to taste the bread as soon as it is out of the oven,” she repeated the comforting words she had been telling him the entire journey to this tiny inn in this little village where Richard had instructed her to leave him in her sister’s care. She looked into his sober face that had never resembled her husband’s, rather featured the Chance black hair, blue eyes, and defiant chin. Harry would be better off at Dashbourne than at home, free to be a boy. It was she who would hate every day of this month apart. She stroked his cheek, then stood.

Lord Dare filled the inn doorway, his coat dripping, knees and boots muddy, and face inscrutable. A scar now cut across his jaw, lending an air of danger to his male beauty.

“My lord,” she bit through tight lips.

His attention shifted to Harry at her hip.

“Do you know him, Mama?” her son whispered in the comically voluble whisper of the young.

She reached down and clasped his little fingers. “He is Lord Dare. Bow to him now, darling.”

“Why doesn’t he come in out of the rain?” His whisper filled the foyer.

“Because he is a peculiar man,” she said. “Peculiar men who are very wealthy do anything they want.”

“Even stand in the rain?” Harry asked skeptically.

“You should see me when it snows,” Lord Dare said, and stepped into the foyer. His voice was as deep and velvety as it had been years ago. Adorned with a caped greatcoat and tall crowned hat, his presence dominated the small space. Were he atop a mountain, Calista thought, he would still seem to command the peaks with his quiet authority and stormy eyes. … 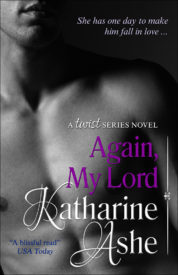 is Book 1 in the Twist Series

Riveting and captivating to the very end! There are plot twists I never expected… The prose is luminous, elegant... the dialogues are delightful and natural, and the banter between Tacitus and Calista is unparalleled.

Everything I could ask for in an historical romance.

Deeply romantic and wonderfully enchanting. This book made me feel all the feelings. A truly magical romance.

Hilarious, sad, and enchanting. It is totally different from most stories you will ever read.