"The Day It Rained Books" 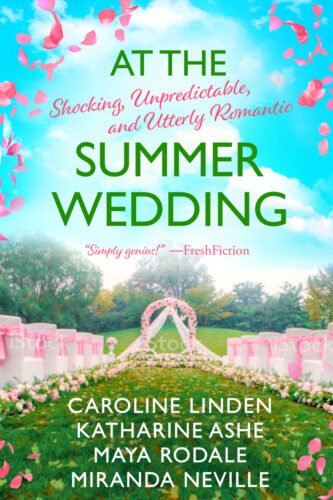 Swept away by a mysterious benefactor to the wedding of the year, librarian Cali Blake is living a fairytale. The only thing missing is Prince Charming. Instead the guests include her archenemy, millionaire playboy Piers Prescott.

Piers is determined to conquer Cali’s resistance to him, and he’ll stop at nothing to have her.

If she can convince herself it’s just for one week, could he be the perfect wedding fling?

[Originally At the Billionaire’s Wedding]

A stately home in the English countryside seems the ideal place for a bad-boy billionaire and his bride to tie the knot. Until the Internet fails. And the oven breaks. And paparazzi invade. And police crash the bachelorette party. And four unlikely couples discover that passion never waits for perfection, and happily ever after is just an “I do” away.

Other novellas in this anthology:

“Will You Be My Wi-Fi?” by Caroline Linden

“That Moment When You Fall in Love” by Maya Rodale

"The Day It Rained Books" 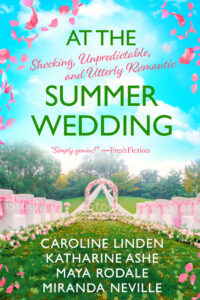 Cali moved toward the bookcases. The only book she really wanted to see wouldn’t be here now: an original 1813 three-volume edition of Jane Austen’s Pride and Prejudice. It must be in safe storage somewhere. Still, she pressed her nose and palms to the sheer wall that separated her from the meager remnants of Lord Melbury’s collection.

The plastic gave way under her hands.

Everything fell. Plastic. Volumes. Pouring down like rain. Cali jumped aside and slammed into the ladder. Something hit her shoulder. Books clattered on her head, knocking her over.

Hands clamped around her shoulders and dragged her from the deluge, slamming her face against a hard chest.

The bookcase thundered to the floor behind her.

Everything went silent. All she knew for an instant were her thudding heartbeats, the soft cotton of a T-shirt under her cheek, and the scent of delicious cologne.

The hands released her. She stepped back and looked into Piers Prescott’s handsome face.

His chest. His cologne.

Air compressed in her lungs. “Oh my God! The books!”

Books everywhere. Smashed beneath the fallen bookcase. Spilling out to either side. Opened. Pages torn and folded. Bindings bent.

Her hands covered her mouth. “Oh.” No breaths. “Oh no. No no no.” Horror. All horror. All the time. Like one of those hole-in-the-wall theaters that only played The Texas Chainsaw Massacre and Halloween I–V.

“Are you all right?” she heard behind her.

She swung around to the bearer of the cologne that was too perfect and dreamy for this horrible moment.

She rubbed her head where a big book had connected. “Fine. Mostly. Thank you for grabbing me.” She twisted back to the books. “But… Oh my God.”

“They said thunderstorms today, but it looks like it’s raining books inside.”

A little ripple of pleasure went right up her spine. He had the sexiest voice. Low and confident. And he’d read her mind.

She wrenched her attention away from the disaster to look over her shoulder. “I think I broke the bookcase.” Oh, God.

“You didn’t. Look. It wasn’t attached to the wall. A light breeze could have toppled it.”

“Are you sure?” Her voice sounded airy. His hand running along the edge of the wall was long-fingered, strong, just as handsome as the rest of him.

“Pretty sure.” He moved around the pile of books, plastic, shelves, and scattered plaster to the next case. He grasped the side and it wobbled. “This isn’t attached either.”

“Maybe they disconnected them for the renovation.”

“I suspect.” He returned to her and stood looking down at her. “Still fine?”

But he wasn’t any guy, and it wasn’t just his features. It was the warmth in his very blue eyes and the set of his mouth, like he might be about to smile, but could get really serious really quickly too. It made his classical good looks vibrate with grab-him-and-kiss-him sex appeal.

She wanted to. Now. 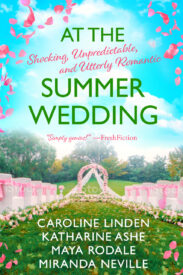 The four stories blend effortlessly into the final pages. With humor and wit, this sexy selection will definitely please romance readers.

Deliciously sexy. A trip to the contemporary side of romance with historical flare. If you've ever taken on the roll of 'always a bridesmaid, never the bride' you're going to love Katharine Ashe's The Day it Rained Books. Who hasn't dreamed of a wedding party hook up...one staring a sexy, rich bachelor and strong, loving heroine?

Be still my heart… A sweet and seductive story.

Romance writing at its best!

"This story was an emotional read... At the Billionaire's Wedding is a fantastic contemporary anthology."