At the Christmas Wedding

"Snowy Night With a Duke" 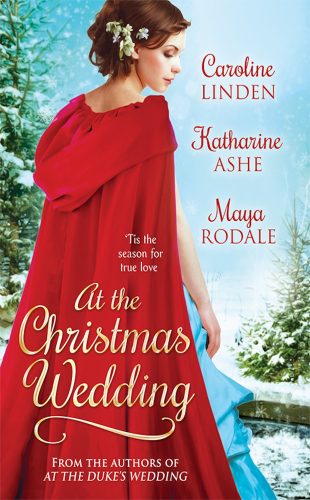 This time there’s nowhere to hide…

The last time Lady Charlotte Ascot bumped into the Duke of Frye, she climbed a tree to avoid him. Sometimes it’s simply easier to run away than to face her feelings for him! Now, on her way to Kingstag Castle to celebrate the holidays with friends, Charlotte is trapped by a snow storm at a tiny country inn with the duke of her steamy dreams. But Frye has a secret of his own, and Christmas is the ideal time to finally tell the woman he’s always wanted the whole unvarnished truth. Better yet, he’ll show her…

Snowbound in a castle full of handsome lords, three young ladies are about to have the holiday of their lives.

“Map of a Lady’s Heart” by Caroline Linden

“Hot Rogue on a Cold Night” by Maya Rodale

“Snowy Night With a Duke” by Katharine Ashe

At the Christmas Wedding is a sequel to The Lady Authors’ bestselling anthology At the Duke’s Wedding.

"Snowy Night With a Duke" 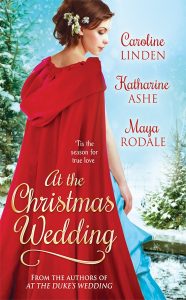 Somewhere off the main road, near Dorchester.

When the Mail Coach from London skidded into the yard to disgorge its frozen contents before the tiny inn, its team was lathered and the poor souls atop laden with snow. Yet not all passengers immediately disembarked. Two lingered within.

During the slog through the thickening snow, as the other passengers had grown increasingly alarmed by the icy road, these two young men had alternately snored, yawned, and traded an engraved flask between them. By their fine coats, shiny boots, and thorough disregard for proper public coach decorum, it was clear to everybody that they were town rowdies.

Why they had stooped to travel on the coach, one passenger guessed: the sprigs of high society must be pockets-to-let and fleeing costly London for the less costly delights of Christmas in the countryside. The other passengers simply wished all of high society to the devil, and especially this unimpressive example and his obviously French friend.

But when the last of the respectable passengers had climbed down from the coach, the change that came over the two young sots was extraordinary. Slumped shoulders squared, slack jaws grew taut, and eyes that had been hazy with drink gleamed with sharp determination.

“Right, then,” the Englishman said in a baritone of such smooth, confident resonance that the Prince Regent had given its owner a fond nickname: Church Bell.

“As planned,” his companion replied, his voice inflected by the cadence of speech of his native island. For he was not, after all, French, rather Haitian. “Then we part ways, my friend, you to return to—”

“Mon ami.” The Haitian leaned back against the worn squabs, folding arms thick with muscle. “You cannot—”

“No,” the Englishman said calmly, his breath frosting in the chilly air. “That is over and done with. The best thing I can do now is to leave her be.”

The Haitian’s scowl looked more like a half-grin. The two had known each other since age ten and were like brothers.

“Now, to our present concern.” The Englishman extended his right hand and the Haitian grasped it hard, sinews and bones meeting exactly as they had for fifteen years, since their school days, every time they embarked upon another such mission. In those days, their missions had been minor: return the Headmaster’s stolen wig without detection, hide spiders in the Head Boy’s bed linens, and the like.

Now they did missions on behalf of the crown, and they were deadly serious.

“Solve the mystery,” the Englishman said, the words a sacred ritual.

“Fight the battle.” The Haitian’s eyes glimmered with pleasure.

The Englishman cocked a grin. “Save the girl.”

Then they were opening the door and—shoulders slumping and strides intentionally unsteady—they tromped through the snow toward the inn that glowed with warm welcome.

The Fiddler’s Roost Inn: the taproom and yard.

Sometimes it was not in a lady’s best interests to follow any dictates but those of her own heart. Because Lady Charlotte Ascot, daughter of the Earl of Ware, had discovered this at a young age—eight, to be precise, during a footrace against boys with considerably longer legs than she—when faced with a challenge to her courage at the age of twenty-one, she did not hesitate to set out from London alone for Kingstag Castle, where all of her friends were gathering for a holiday party.

For in fact the gathering was not really a holiday party. It was an emergency. Charlotte’s dear friend Lady Serena Cavendish had recently been jilted by her longtime betrothed, the Duke of Frye, mere months from the wedding. It had shocked the ton. According to a letter from Serena’s sister Alexandra, it had sent Serena into a spiral of distress.

Serena needed all of her dear friends around her now, and Charlotte was one of them. It mattered nothing that Charlotte had only just returned from a two-and-a-half-year trip abroad; friendships cemented in childhood and matured in young womanhood could never be undone, even across an ocean. Also, Charlotte and the Cavendish sisters had written letters to each other constantly since she had left England.

None of those letters had ever hinted that the wedding of Serena and the Duke of Frye had been in jeopardy. Betrothed to Serena since childhood, the duke had always been gorgeously attentive to Serena, everything that a lifelong fiancé should be. Despite the fact that he was the only person in the world whom Charlotte had literally climbed a tree to avoid, she had always particularly admired that about him.

The jilting was as much of a surprise to her as to anybody.

So when the invitation to Kingstag arrived in London, Charlotte did not wait before instructing her family’s coachman Fields to ready the team for travel or her maid to pack her clothes. That was how Charlotte found herself running through a curtain of snow from the carriage and into a little roadside inn in the midst of a blizzard.

And it was how, shortly afterward, she was sipping hot tea in the taproom—for the inn was so small there were no private parlors—and becoming acquainted with a pair of modest gentlewomen who had arrived on the Mail Coach.

“How do you come to be traveling alone, my lady?” Miss Mapplethorpe inquired. At least sixty, with pale eyes and an air of fragility, she smiled gently. Maiden aunt to the orphaned Miss Calliope Jameson, she was accompanying her niece to a distant relative’s home for the holidays.

“Lady Charlotte is not precisely alone, Aunt.” A shy, sweet girl of seventeen, Calliope Jameson shared the same pale eyes and slender frame as her aunt, but to great advantage. She was a beauty. “For she has come with her maid.”

“Most of my family are still at my family’s home in Devon,” Charlotte explained, letting the heat of her teacup burrow into her palms. “They planned to join me in London for Christmas, but I suspect they have been delayed from that anyway.” And a good thing that was. While she missed them dreadfully, her father’s last letter to her in Philadelphia had made clear his intentions: she must return to England and marry. Since she had taken up her aunt’s invitation and fled to America two and a half years ago to avoid marrying, she was hardly eager to see her father anyway.

“My younger brother, Henry, is staying at a house quite nearby,” she added. “Although I don’t suppose the snow will allow me to see him this holiday either.”

“Oh dear, my lady,” Miss Mapplethorpe said with a shake of her head. “How dreadful to be far from family at Christmastime.”

“Perhaps not so dreadful,” Charlotte replied with a smile at both of them. “I shall have you two as company, after all.”

It was at that moment that they were roused from their cozy tea by a ruckus just outside. Miss Mapplethorpe went to the window to investigate.

“Good heavens,” she said. “I believe there is a brawl taking place in the yard.”

Calliope leaped up and went to her side. “It is those young men from the coach!”

The other guests were streaming out into the snow.

“Who can resist a brawl between two toffs?” one of them said excitedly.

Miss Mapplethorpe and Calliope hurried in that direction. Possessed of a natural curiosity, Charlotte followed.

And so it was that in the snow that still fell in thick curtains, Charlotte discovered the jilting Duke of Frye engaged in a flagrant bout of fisticuffs only moments before his opponent got the best of him.

At the Christmas Wedding 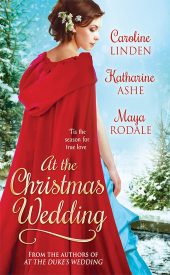 The three stories are perfect seasonal fare – warm, light-hearted and perfectly romantic, laced with humour, filled with likeable principals and served up with a soupçon of Yuletide cheer and festive frolic... "Snowy Night With a Duke" is a charming, tender and passionate romance and a terrific way to round off this set of seasonal love stories.