At the Duke’s Wedding

“How Angela Got Her Rogue Back” 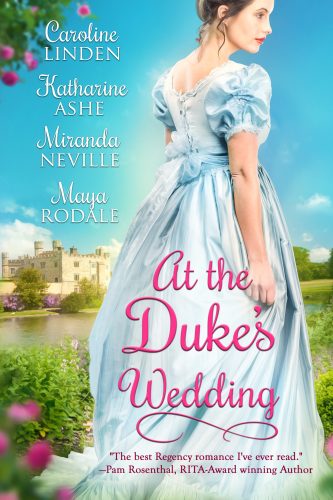 She desperately needed a holiday. She just didn’t know it would be in the 19th century.

When gorgeous Lord Trenton Ascot beckons to history grad student Angela Cowdrey from the pages of a comic book, she thinks she’s going crazy. When Trent rescues her from a lake and she claims she’s from the future, he knows he is. But a blackmailer is threatening Trent’s family and Angela is determined to help. While unraveling the mystery of her presence in the past, this modern girl and Regency lord just might discover a passion that defies the centuries.

Matrimony is in the air as society gathers at Kingstag Castle for the Duke of Wessex’s wedding. But who will be the bride? With swoon-worthy lords, witty ladies, eccentric relatives, a gaggle of free-spirited girls, and the world’s best high-perch phaeton, it’s a recipe for mayhem… and romance.

“That Rogue Jack” by Maya Rodale

“P.S. I Love You” by Miranda Neville

“When I Met My Duchess” by Caroline Linden

“How Angela Got Her Rogue Back” by Katharine Ashe

“How Angela Got Her Rogue Back” 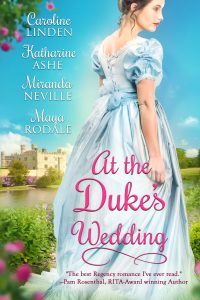 When her rescuer returned, he was wearing boots and a coat over the rest of his wet clothing.

“You didn’t change your clothes,” Angela said, standing up.

He scanned her anew, his gaze lingering on her bare feet, then rising swiftly to her face. “No,” he said a little hoarsely, and set a pile of clothing on the bench. “My sister was absent. I was making a hash of searching her belongings when her maid entered and assisted me. I do hope they suit.” He moved to the door.

“The maid gave you a change of your sister’s clothes just like that?”

“I told her my sister had fallen into a puddle.”

“And she believed you?”

“It was that or the truth.” He ran a hand through his hair, tousling the dark gold locks in an incredibly sexy gesture of discomfort. “Secluded boat house. Lone woman in need of clothing . . .”

“I will await you without.”

The gown was of exquisite white muslin with tiny rosebuds embroidered all over the skirt. The silk petticoat and linen chemise were each as light as feathers. He’d also brought a set of simple stays and a pair of pink satin slippers.

Stays. He’d brought stays. And enough clothes to dress three women in the twenty-first century. Even in England.

It was real. But it couldn’t be.

She was trembling hard as she slipped the shift over her head. She’d been to every museum exhibit of British imperial culture she could and she’d read dozens of books about the English cloth trade and garment industry and even Regency-era fashion. She had a pretty good idea of how to dress in these clothes. She also knew that the stays were essential for the proper fitting of the gown, but try as she might she couldn’t fasten them. The hooks were too small and her hands were too shaky. She was probably in shock. Physical shock. Mental shock. Spatial shock. Temporal shock.

She went to the door and peeked out. “My lord?” The words sounded funny. She’d never spoken with an actual nobleman before. Or an actor pretending to be a nobleman.

He stood with his back to the boathouse. He looked over his shoulder, and Angela’s heart turned over. Just like in the comic book.

“I need help,” she managed to say.

She half expected him to refuse, but he came toward her.

His attention dropped to her hands pressing the stays against her ribs, then shifted up to her breasts. They were entirely concealed by the shift, but his gaze made her feel like he could see right though cloth, like Superman.

“I can’t fasten the stays on my own,” she croaked.

A dark flush rose in his chiseled cheeks. Standing in the thin chemise and unfastened corset beneath his gaze, she felt hotter than her mother on that Caribbean beach, and just as sexy.

She didn’t even care if he was an actor.

At the Duke’s Wedding 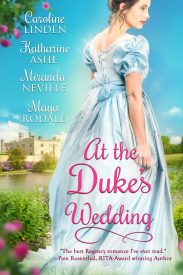 The best Regency romance I ever read.

Filled with romance, passion, danger, scandal, and love… A must read!

— My Book Addiction and More

Four fabulous authors in one place. The perfect summer read!

A delightful anthology. The four stories are tied together wonderfully... entertaining, fun and heartwarming.