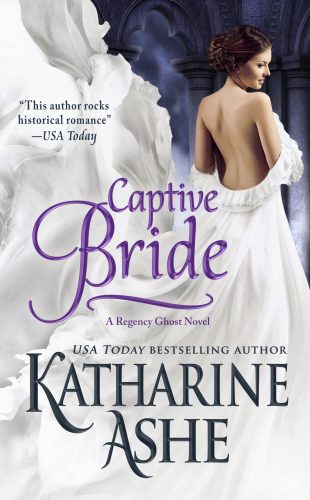 Book 1 in the Ghost of Gwynedd Castle

A dark castle, a handsome lord, and a wicked ghost…

When Bea Sinclaire’s scapegrace brother begs her help to rescue a maiden from a haunted castle, she seizes the chance for adventure. If only Lord Peter “Tip” Cheriot didn’t insist on coming along. How can she maintain a clear head in the face of danger when Tip is so utterly, deliciously distracting? Then an alluring ghost makes Bea a shocking offer, and he won’t take no for an answer.

Tip has loved Bea forever, and he’s determined to have her—no matter how scandalous his past. But a cursed specter has claimed Bea as his bride, and Tip must save her from eternal darkness before All Hallows Eve. In the race to capture the heart of one daring lady, it’s every man—and ghost—for himself.

* This is a reissue of the original 2012 edition, with minor editorial changes and BONUS MATERIAL: the soundtrack to Captive Bride.

He noticed them and he could not forget them.

But that story was not theirs.  It went along its way, leaving them stealing glances at one another, tongue-tying him when their gazes met yet offering him no opportunity to become un-tongue-tied.

After that the girl and young gentleman visited me occasionally.  Like ghosts. Late at night when the wind howled and all lights were dimmed save the lamp of my laptop, one or the other would tap meaningfully on my computer screen.  They had stolen enough glances to know the truth of it.  They urged me to write their story.

Usually, he did the urging.  He was impatient to enjoy this pretty girl upon his arm.  Rather, in his arms.  She urged more decorously, hinting that her heart would not be young forever.  But she could not hide from me that she had already given it to him.  Wouldn’t I allow her what she longed for?

And so in the dark I wrote a scene here, a few lines of dialogue there.  In the daylight I often thought of them—ghosts are difficult to ignore—but I could never find time.

But this hopeful pair would not be put off.  Their haunting grew persistent.  I assured them their time would come.  I reminded him that at the very least he must wait a few years until she became a lady.

Then, on a chill, gray day not long ago I found myself in Wales, encompassed in fog upon a velvet hillside.  In the mists towered a great ruin of a fortress, black and craggily, mysterious, downright ominous.  And their story unfolded — a cursed castle, a tortured specter, and a love strong and constant enough to fight the darkest demons and inspire the most breathtaking miracles.

Now, dear readers, because every satisfying ghost story should be shared—not to mention every delicious love story — I am giving it to you.  Also, they insisted upon it, he with dashing confidence, she with that sweet, pensive smile, all the sweeter now because…  Well, I’ll let you discover that for yourselves. 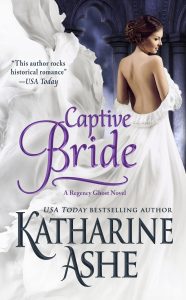 The intimacy of the narrow corridor, lit only by the stump of a torch, with Tip just behind her, closed in on Bea swiftly. She went the few yards to her bedchamber door and paused. He was near enough to touch, tall and dark in the shadowed passageway. She crossed her arms, hugging them to her for warmth.

“You really should leave here,” she said.

“I will not. I have already told you so.”

“This trouble has nothing to do with you.”

“You are involved. It does now.”

Bea tried to discern his expression in the dimness.

“Why don’t you allow me to decide what I do or do not like, hm?” He leaned one broad shoulder against her bedchamber door, as though perfectly at ease. “It’s a bit like one of those novels you enjoy so much, isn’t it? The stories featuring horrid villains and helpless maidens.”

“I do not enjoy those sorts of novels.”

Her cheeks got positively scalding.

“How would you know that?”

Tip’s gaze shifted, as though studying her blush.

“I have accompanied you to the lending library in York at least half a dozen times, my girl. I am not blind.”

Bea begged to differ. For years he had not been able to see how much she loved him.

“Of course you have. I just never thought you would—” She halted and bit her lower lip.

The light in Tip’s eyes seemed to flicker in the torch-glow.

“You never thought I would what, practical, sensible Miss Sinclaire? Notice your shameful secret?”

She swallowed hard. Then frowned. Why must he always tease her? He never teased Georgie; he always treated her with complete respect.

“I never thought you would care enough to notice,” she said shortly.

He pushed away from the door, coming within inches of her.

“I care. Always have.” A slight tilt of his mouth cut a crease in his cheek. Warmth trickled into Bea’s veins. She did not care for his teasing, but his smile made her want to laugh and cry at once, filling her with sweet longing and fear that it would all disappear, that he would finally find another lady he could love, cease visiting York, and she would never see that smile again.

Her pulse raced, but she smiled back. She could never resist his good humor, especially now, seeing it for the first time since Thomas told them about Iversly.

Tip’s eyes took on a peculiar glint, the same she had spied earlier in the parlor and again at dinner.

Bea’s heart turned over. She liked standing in the corridor with him alone in the middle of the night? Most assuredly. Like a pathetic, dream-starved girl.

“This?” she managed to breathe.

“I still cannot believe it, yet I feel deuced foolish not to have realized it sooner.” He ran his hand through his dark locks around to the back of his neck. The gesture was so unconscious, so boyish and manly at once, it sent a delicious ripple through her. The corridor seemed very narrow.

“It isn’t your fault,” she said. “Who would have believed this sort of thing could truly happen?”

“You did.” His tone did not accuse. It sounded oddly bewildered, and his eyes looked bright.

“Well, Thomas wrote of it.”

“You wanted to believe it, didn’t you? You wanted the ghost to be real, and you are happy that he is. Aren’t you?” He looked at her so fixedly, as though he hoped she would deny it.

She could not deny it, not even for him. She’d had so few adventures in her life. None, in truth. She simply could not regret this one, however horrifying it might seem to a rational person. She may as well admit it to him. She was fairly certain he would not tell anyone, especially not Mama; he already knew her nasty little predilection for darkly dramatic prose.

Cheeks hotter than ever, she tightened her arms and met his regard directly.

“I did hope he would be real, and I wanted to be able to help. I cannot imagine a more exciting activity to be engaged in just now.”

“I can.” Tip’s voice sounded rough.

He looked even odder than before, his eyes intense, like emeralds glinting from within a shadow. He put his palm on the stone behind her head and leaned in.

Her heart slammed against her ribs. They had never stood this close, not even while dancing, and that was years ago. He seemed so large from only a few inches away, so masculine and broad, his chest a wall of heady possibility right before her. If she unwound her arms she could touch him, place her palm on his coat and feel his body that looked so firm and powerful, as she had wanted to do for years. Longed to do.

Her breaths shortened. She fumbled behind her for the door handle.

“Not.” His breath feathered across her brow. “Just.” He bent his head. “Yet.” 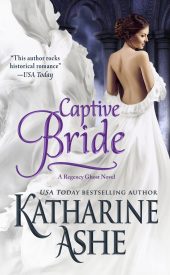 is Book 1 in the Ghost of Gwynedd Castle

Ashe made me believe that these two characters would actually dance around their love for years. … Katharine Ashe is a wonderful storyteller, one that never fails to make me fall in love.